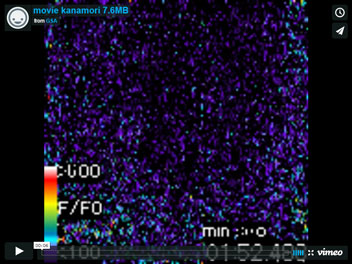 During neural circuit remodeling, axons and dendrites that are not necessary anymore are selectively pruned away to establish proper connectivity. Class IV dendritic arborization neurons (C4da neurons) eliminate all their dendritic branches in early metamorphosis, when a larval sensory circuit begins to transform into an adult one. Using live imaging and genetics, we found that compartmentalized calcium transients occur in dendritic branches of C4da neurons before pruning, and that they predict spatiotemporally the dendritic branches to be eliminated in several hours.

This movie shows discharges of calcium transients that occur in two independent dendritic regions of a single C4da neuron in an intact pupa. The intracellular calcium level was monitored as changes in fluorescence of GCaMP3, a genetically encoded calcium indicator, which was expressed specifically in C4da neurons under the control of the pickpocket Gal4 driver. 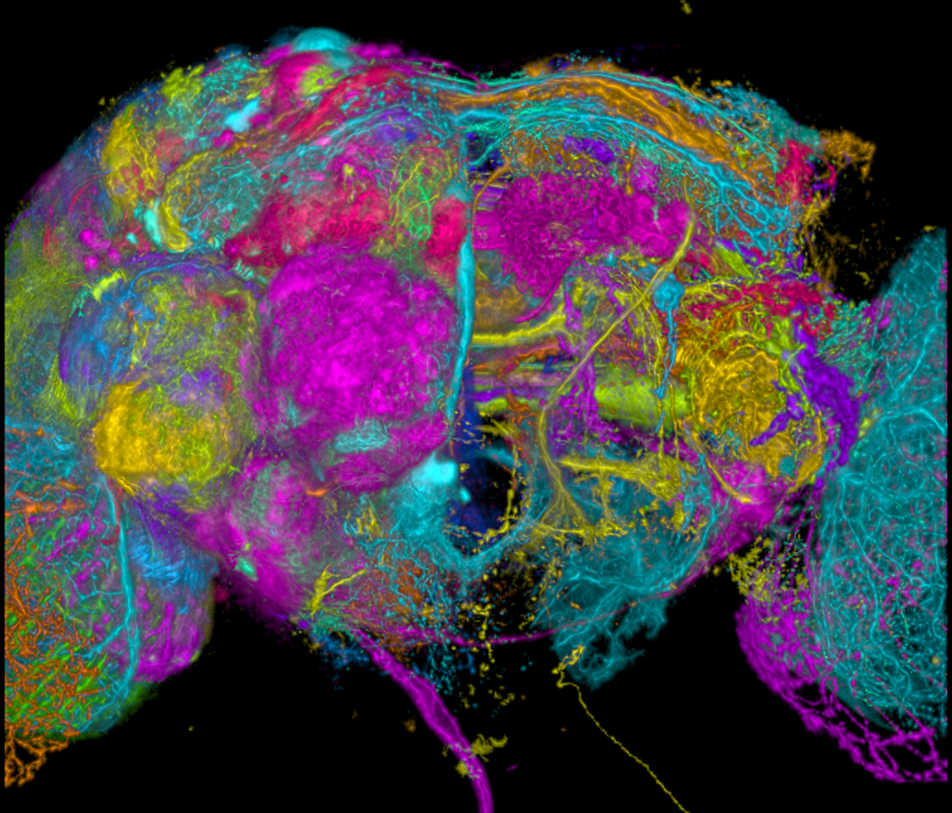 Spatial association of clonal units in the Drosophila brain

A clonal unit that is a set of characteristic neural circuits formed by the neurons derived from a single neuroblast. The adult Drosophila brain should be composed by 104 types of clonal units, because there are 104 neuroblasts in the embryonic brain. Comparing different samples by registration to the standard brain, we identified 96 clonal units out of the expected 104 units. This figure is the overlay of these clonal units on the right side of the brain. Each clonal unit is randomly colored. This figure clearly shows that the Drosophila brain has a clonally associated structure. 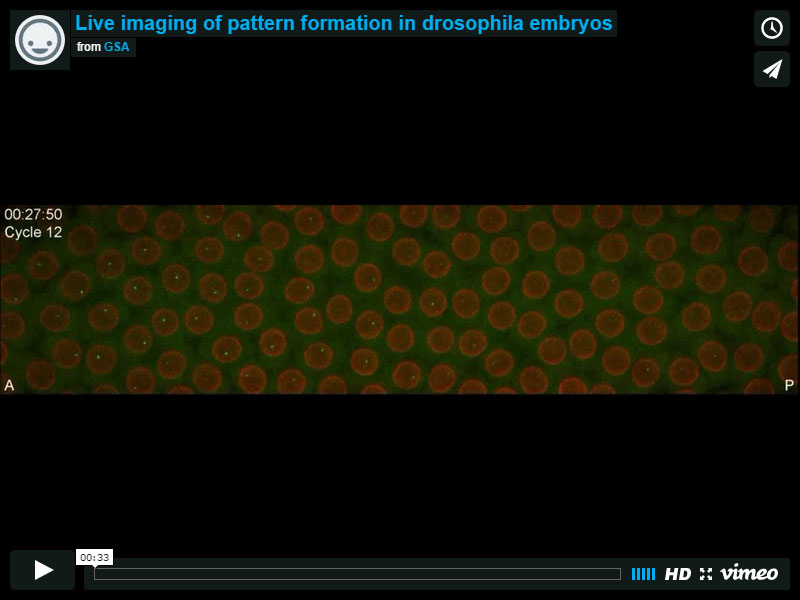 Here, the first step in gene expression is directly visualized in living embryos by the detection of nascent transcripts using the MS2-MCP system. The movie shows the accumulation of fluorescently tagged transcripts (in green) at their sites of synthesis in each nucleus (in red). Transcription activity periods at the Hunchback canonical promoter start synchronously after mitosis along the whole antero-posterior (AP) axis. In the anterior half (left), the length of activity periods scales with the interphase duration in a Bicoid-dependent manner. In the posterior half (right), the length of activity periods is shorter than interphase duration and decreases over cycles to finally become null at interphase 14. These findings establish that the early regulation of hunchback expression is more complex than previously anticipated and does not exclusively rely on the Bicoid morphogen. 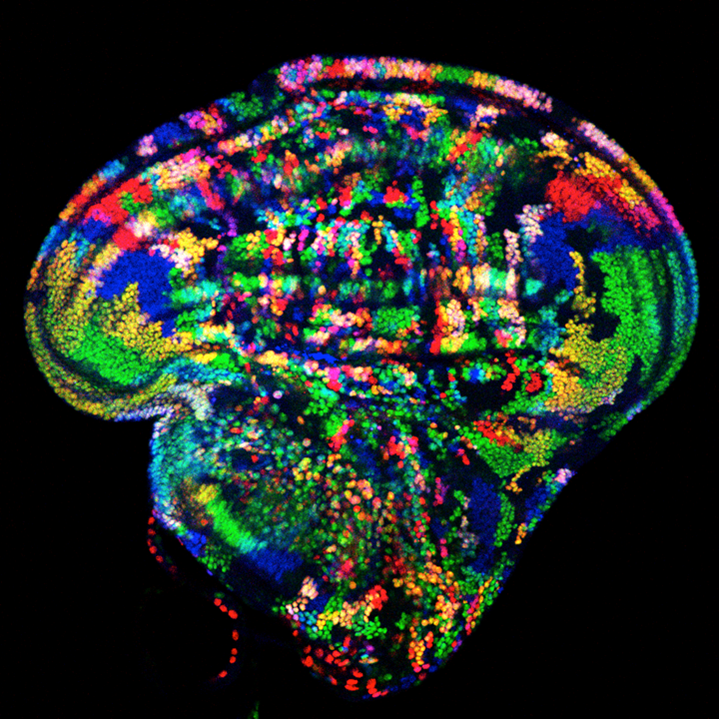 Ectopic expression of dpp in the developing wing imaginal disc leads to overgrowth on both the anterior and posterior sides, especially in the lateral regions. This is clearly visualized by the generation of both GAL4(+) (colored: red, yellow, purple and white) and non-GAL4 (colored: green, blue and teal) clones by the TIE-DYE marking system and comparing the areas of contiguous color between the lateral and medial regions. Note that the medial region of the disc is composed of many small clones, whereas the lateral regions of the disc contain much larger clones. In addition, the effect on clone size is observed equally in GAL4(+) and non-GAL4 clones, which indicates that the growth effect is non-cell-autonomous. Thus, at a single glance, the TIE-DYE method makes it possible to observe both the region-specific effects as well as the non-cell-autonomous nature of the phenotype.

TIE-DYE: a combinatorial marking system to visualize and genetically manipulate clones during development in Drosophila melanogaster. 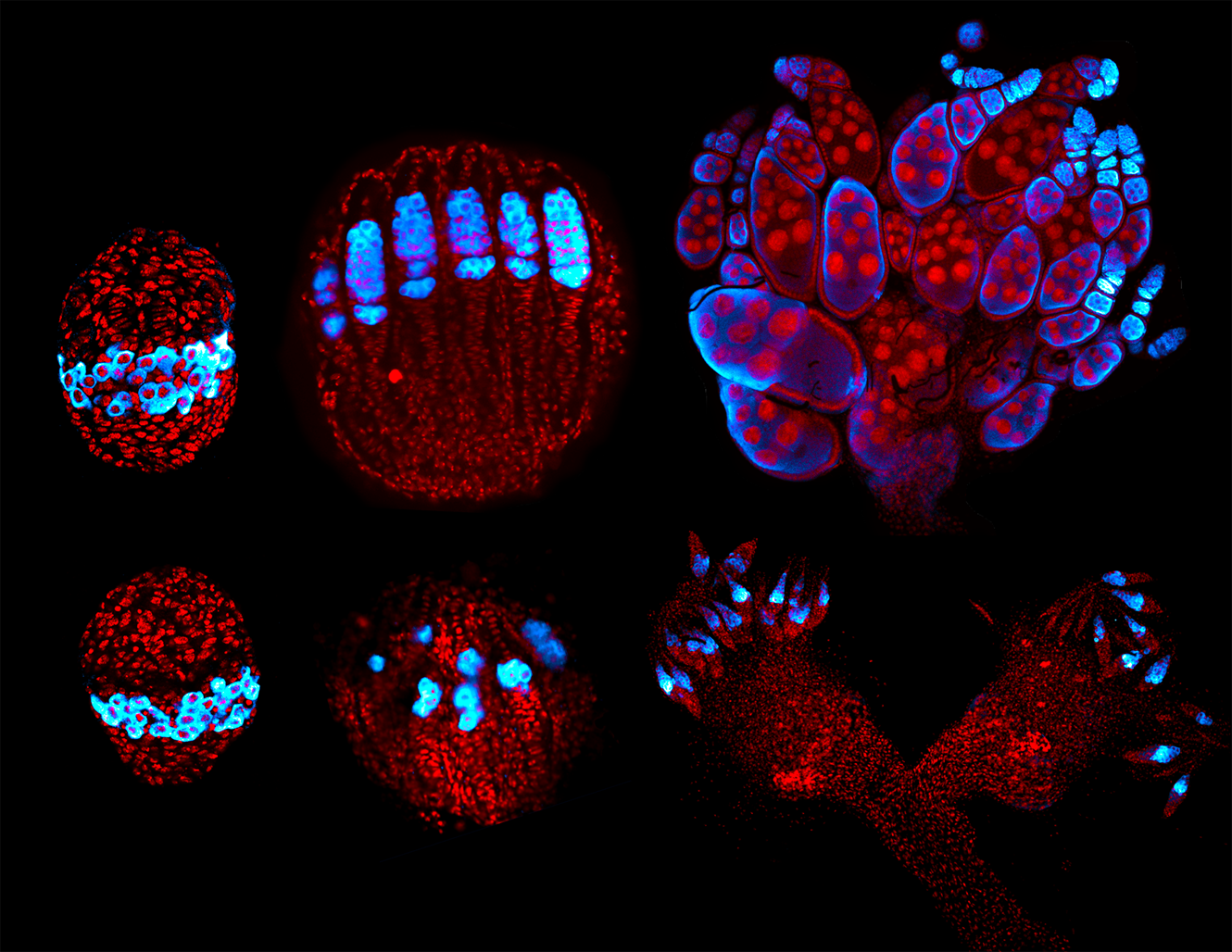 The image shows gonad development in wild type (top row) and otefin mutants (bottom row). Left to right: larval, pupal, and newly eclosed adult ovaries are shown. DNA stained by DAPI is shown in red and the germline-specific Vasa is shown in cyan. 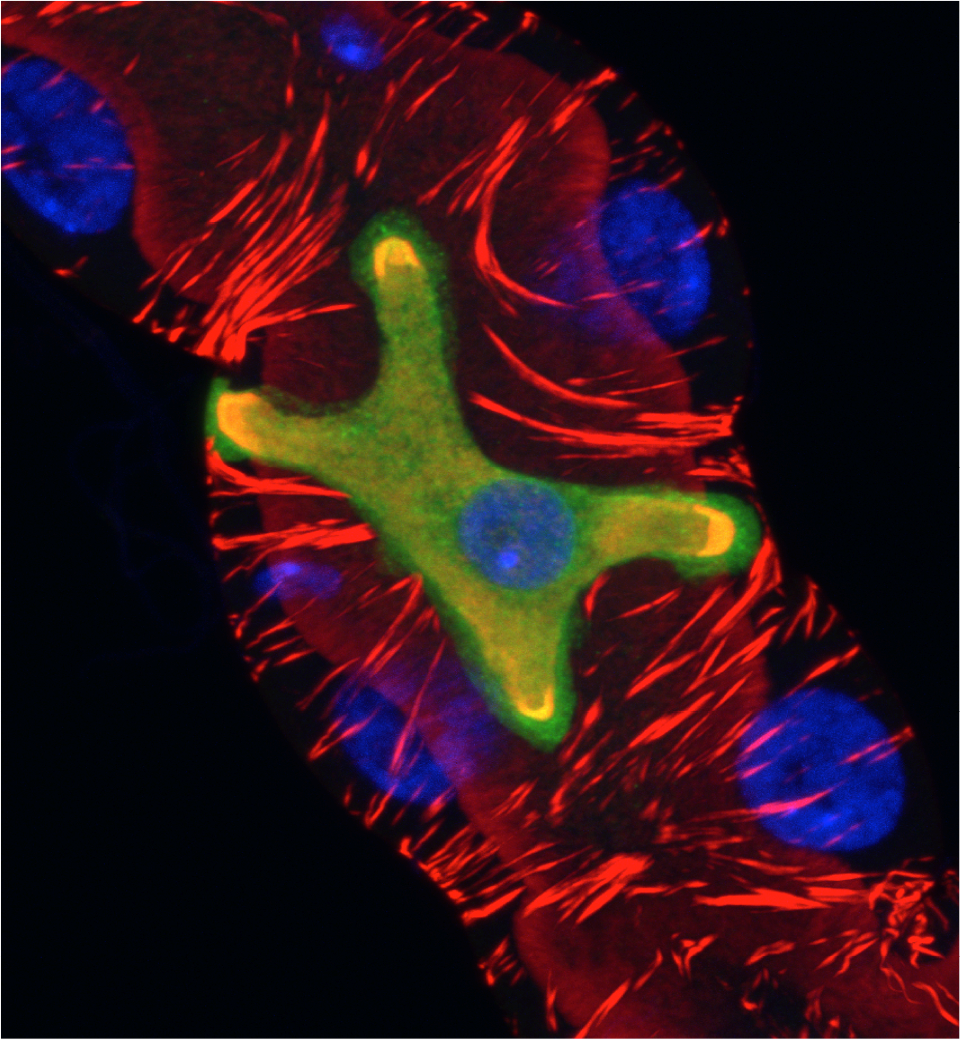 A star is born: physiological differentiation of stellate cells in the Malpighian tubules of Drosophila

Secretory activity in the Drosophila Malpighian tubule is underpinned by an interplay between two physiologically distinctive cell-types: principal and stellate cells. We show that physiological differentiation of stellate cells is under the control of the Teashirt/Tiptop transcription factors. Teashirt regulates expression of the repertoire of channels and receptors that characterise differentiated stellate cells and are required for primary urine production and responsiveness to diuretic stimuli. Teashirt also controls the dramatic transformation in cell morphology that gives the cells their eponymous stellate shape. tiptop, a teashirt orthologue, is expressed in beetle and cricket Malpighian tubules suggesting these genes have an ancient, conserved role in controlling physiological maturation of stellate cells across the insects. The image shows a small region of an adult Drosophila Malpighian tubule showing a single stellate cell (GFP, green) and several principal cells (unlabelled). The tubule is counterstained with phalloidin (red) and DAPI (blue) to highlight the actin cytoskeleton and nuclei respectively. 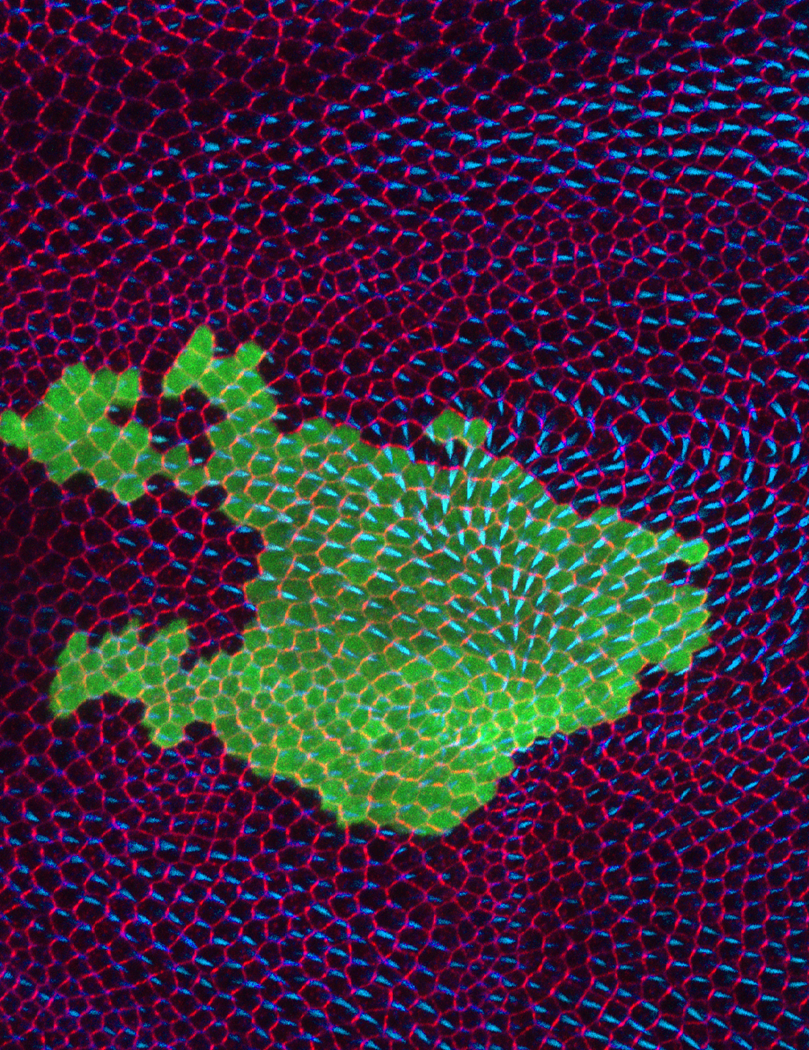 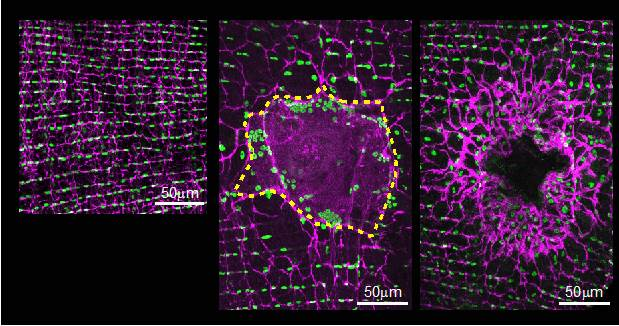 The adult fly epidermis heals by polyploidization and cell fusion

The adult Drosophila epidermis is organized into rows of epithelial cells in the ventral pleura region (left panel). Wounding the epidermis with a small puncture caused a dramatic reorganization of the epithelium. At 3 days post injury a giant syncytium (outlined by dashed yellow line) formed at the wound site (middle panel). Surprisingly cell division did not occur, instead epithelial cells within and surrounding the syncytium became enlarged and polyploid to restore homeostasis. We found these two responses to work in parallel to repair the epidermis since wound healing was only eliminated when both cell fusion and polyploidization were blocked (right panel). Images shown are immunofluorescence z-stack projections with epithelial septate junctions in magenta and epithelial nuclei in green.

Polyploidization and cell fusion contribute to wound healing in the adult Drosophila epithelium. 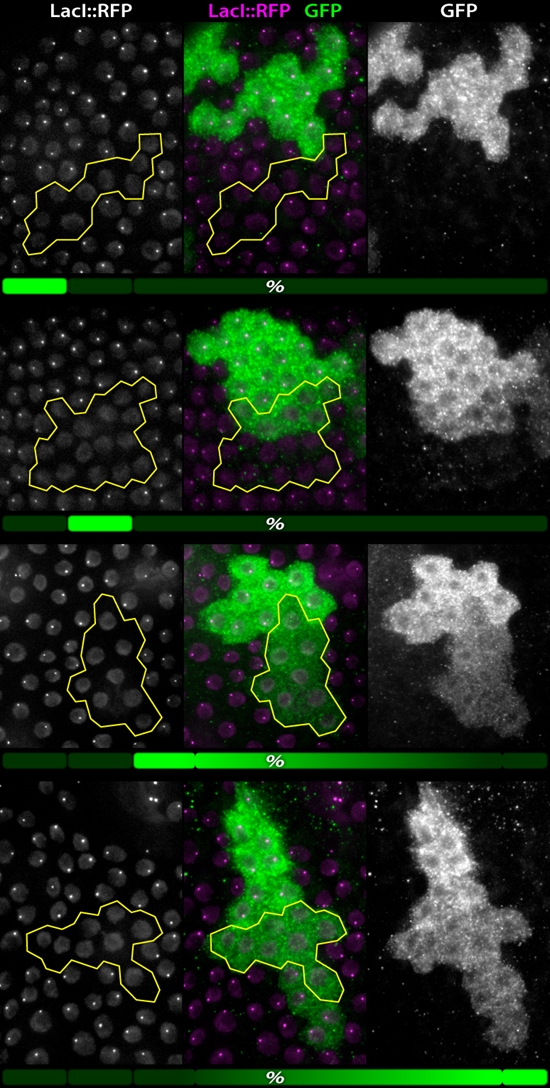 Stabilized intercellular bridges, or ring canals, are a feature of the Drosophila germline and several somatic tissues. To investigate the contribution of somatic ring canals to intercellular communication in follicle cells and imaginal discs, we employed both photo-manipulation and recombination strategies.

In this image, we present the results of a recombination strategy in follicle cells in which mitotic clones are unambiguously identified by a LacO DNA element that is bound by the LacI::RFP transgene. Additionally, a recombination-induced GFP gene was engineered such that one side of the mitotic clone (2x LacO) produces GFP while the other side (0xLacO, highlighted yellow) produces no GFP. The presence of GFP in the 0xLacO cells (which have no GFP gene) demonstrates intercellular exchange of cytoplasmic protein, namely, GFP. The fraction of clones (=2 cells) exhibiting no exchange (12%), incomplete exchange (12%), and complete exchange (76%) through the 0xLacO cells is illustrated below each series (green bar). A fraction of the “complete” clones also displayed additional diffusion of GFP into non-recombined cells on the opposite side of the clone (fourth series); of the total, 12% had no additional diffusion, 8% did have additional diffusion, and the remaining 56% was undeterminable (illustrated as gradient).

We describe the development of a novel method to quantitatively describe the walking parameters of unrestrained adult wild type and sensory deprived Drosophila melanogaster. This method combines an optical touch sensor, high-speed video imaging and a software package that can track not only the fly’s body but also each footprint as they touch the surface to propel its body forward. This method will open opportunities to identify genes, circuits and mechanisms involved in locomotion. 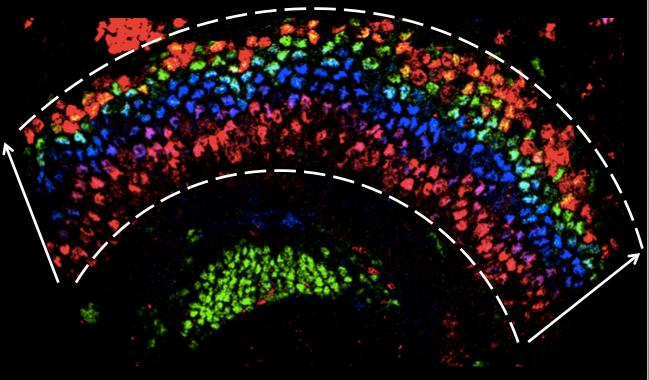 A temporal cascade of transcription factors in Drosophila medulla neuroblasts

In the crescent-shaped developing Drosophila medulla, we can visualize neuroblasts of different ages in one snapshot. In this image, medulla neuroblasts are between the dashed lines, and the arrow indicates the direction from the youngest to oldest neuroblasts. We identified five transcription factors, including Homothorax (red at the bottom), Eyeless (blue), Sloppy paired (green), Dichaete (red on the top) and Tailless (not shown), that are sequentially expressed in medulla neuroblasts as they age. These temporally-expressed transcription factors are required for the sequential generation of different neural types. 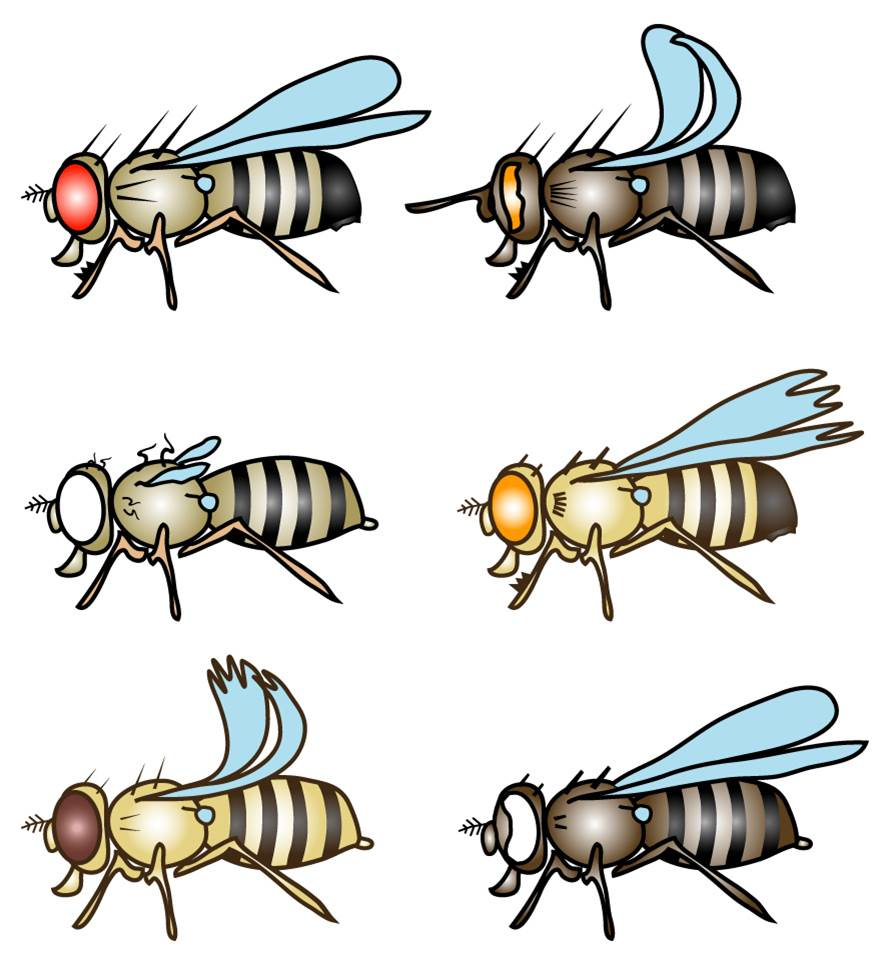 This image shows schematic presentations of flies carrying combinations of marker mutations. It was generated with the genotype builder, a simple and efficient tool to produce pictograms for genetic mating schemes – useful for fly labs and teachers at schools or Universities alike. The genotype builder is part of a Drosophila genetics training package designed to introduce newcomers to key knowledge required for Drosophila work, ranging from classical genetics to principles of transgenesis, and help to maintain awareness of the fundamental roots of fly genetics.

(2013). How to design a genetic mating scheme: a basic training package for Drosophila genetics.