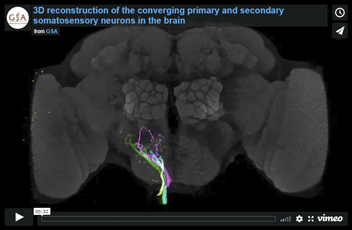 3D reconstruction of the converging primary and secondary somatosensory neurons in the brain.

Topological and modality-specific representation of somatosensory information in the fly brain.
Science. Nov 3;358(6363):615-623 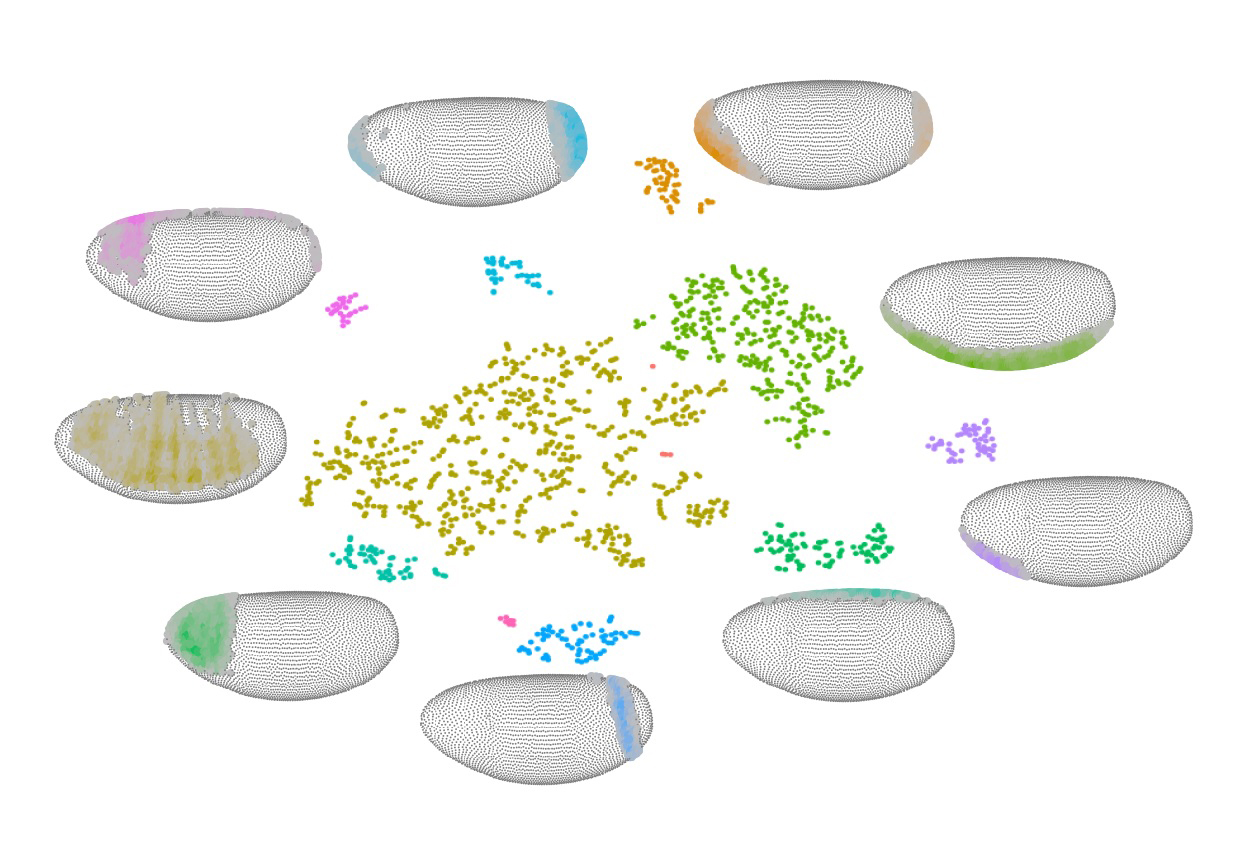 Putting an embryo back together – cell by cell

Patterned gene expression drives early development as cells specify and differentiate. We disassembled early embryos at the onset of gastrulation into single cells and sequenced the transcriptomes of thousands of individual cells. Center: The sequenced cells cluster according to transcriptome similarity as represented by tSNE; each cluster distinguishes itself by combinatorial expression of characteristic genes. Periphery: To reveal the spatial information hidden in the transcriptomes of individual cells, we developed mapping algorithms to accurately place cells back onto a map of the embryo. Lateral views of virtual embryos show the location of cluster cells.

Not shown is that once cells are mapped, the resulting virtual embryo lets us predict the expression across thousands of coding and non-coding transcripts at the single cell level (virtual in situ hybridizations). This, in turn, allows novel insights into where and in what combinations genes are expressed, how nearby cells communicate, and how spatial gene expression patterns evolve among related drosophilids. 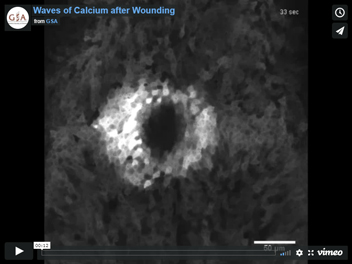 Waves of Calcium after Wounding

When epithelial tissues are wounded, a large field of cells repairs the damage. The majority of these responding cells are not adjacent to the wound, and it is not known how these cells detect damage many cell diameters away.  The earliest known cellular response that occurs across the wound bed is a rapid increase in cytosolic calcium, and this response is conserved throughout the animal kingdom. How does the wound trigger an increase in cytosolic calcium? Although several mechanisms have been proposed, the basis of epithelial wound detection in vivo remains unclear.

Here we image calcium dynamics in vivo during laser-wounding of the epithelial monolayer of the Drosophila pupal notum. Quantitative image analysis and computational modeling identify three distinct phases of calcium increases: an initial influx of calcium through damaged plasma membranes within 10 milliseconds after ablation, and two diffusive waves traveling from the wound at different speeds by different mechanisms. The combination of quantitative high-resolution temporal and spatial analysis combined with conditional and tissue-specific genetics allows these overlapping mechanisms to be deciphered. 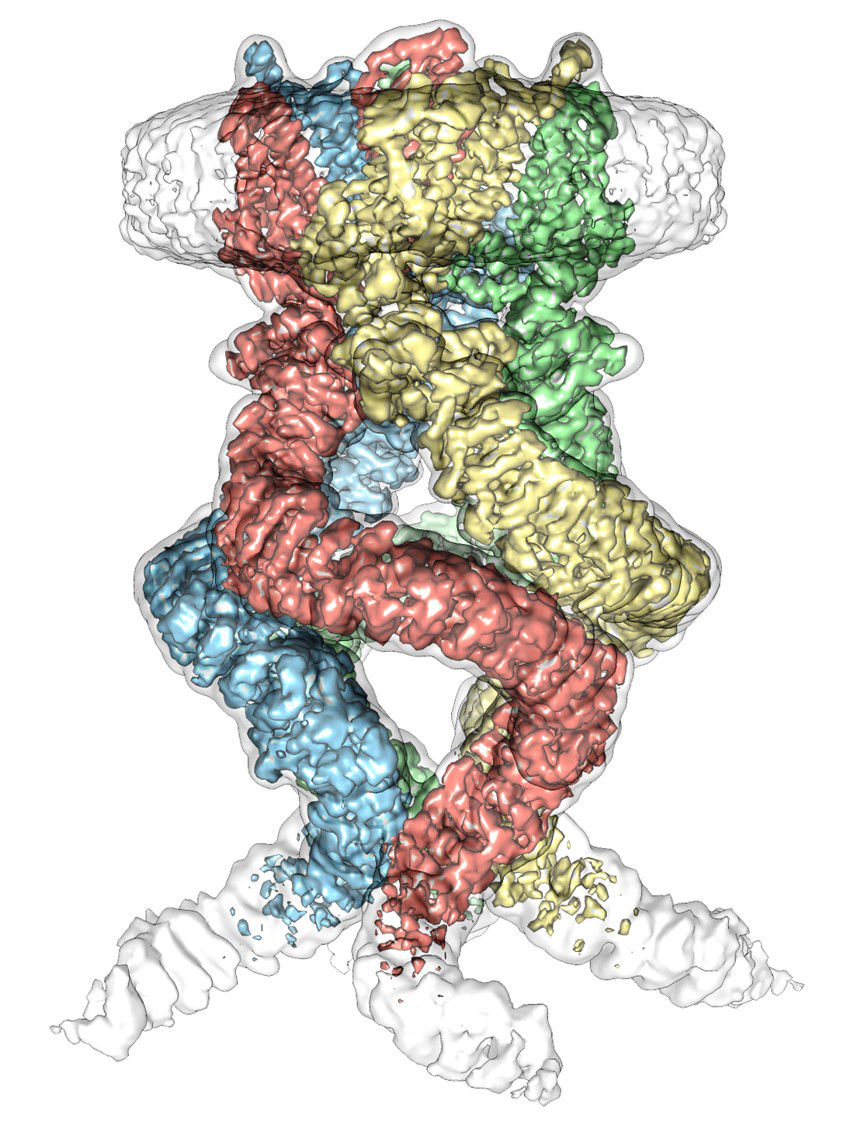 Mechanosensory transduction for senses such as touch, hearing, proprioception and balance rely on the conversion of mechanical force into nerve impulses by mechanotransduction ion channels. How force is transmitted to the pore-forming domain of these channels and switch the channels between open and closed states remains a key open question in this field, for which two major models have been proposed. One is the membrane-tension model: force applied to the membrane generates a change in membrane tension that is sufficient to gate the channel. The other is the tether model: force is transmitted via a tether to gate the channel. Drosophila NOMPC, the founding member of the TRPN sub-family of Transient Receptor Potential (TRP) channels, has been demonstrated to be a representative mechanosensititve channel gated by the tether mechanism: force transduction to the channel requires its 29 ankyrin repeats (ARs) domain tethered to the microtubule cytoskeleton. But it has remained unknown why NOMPC, particularly its ARs domain, is suitable for transducing mechanical displacements of microtubules into electric signal, and how the mechanosensing Ars domain crosstalks with the pore-forming transmembrane domain.

Here we present the near-atomic-resolution structure of Drosophila NOMPC in a membrane-like environment (side view) resolved by single particle cryo-EM. The most striking structural feature of NOMPC is that the four ARs domains of the tetrameric channel converge into a quadruple structure with each domain resembling a helical spring. Two intramolecular interaction sites were found between each adjacent ARs domains, through which the four ARs domains may coordinate to transduce mechanical force. The force is transduced from the ARs tether to the pore forming transmembrane region through a network interaction between pre-S1 linker-TRP domain-S4-S5 linker. This architecture underscores the basis of translating mechanical displacement of the ARs into opening of the pore. 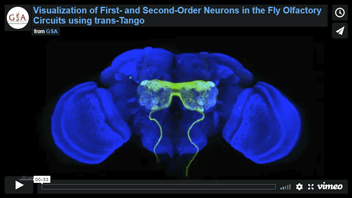 Mapping neural circuits is fundamental for understanding how the brain functions. Traditional techniques, such as electron microscopy, paired recordings and dye injection, or more recent techniques, such as the genetic application of fluorescent proteins, are powerful in mapping circuitry; however, they are either difficult to apply on a large scale or invasive. Additionally, none of these methods provides genetic access to the output neurons in a given circuit that can be further used to interrogate it by monitoring and modulating the activity of the characterized neurons in the living organism. To overcome these challenges, we have recently developed a method, termed trans-Tango, for circuit tracing, monitoring and manipulation. trans-Tango is based on interaction between an exogenous ligand-receptor pair at the synapse, and the subsequent ligand-dependent release of a tethered transcription factor in the postsynaptic neuron, allowing it to initiate the expression of a reporter gene. As a proof-of-principle, we first implemented trans-Tango in the well-studied olfactory circuits. In this video, expression of the trans-Tango ligand in Orco+ olfactory receptor neurons (green) results in postsynaptic mtdTomato expression in local interneurons and projection neurons of the olfactory system (red). Neuropil counterstain (Blue) 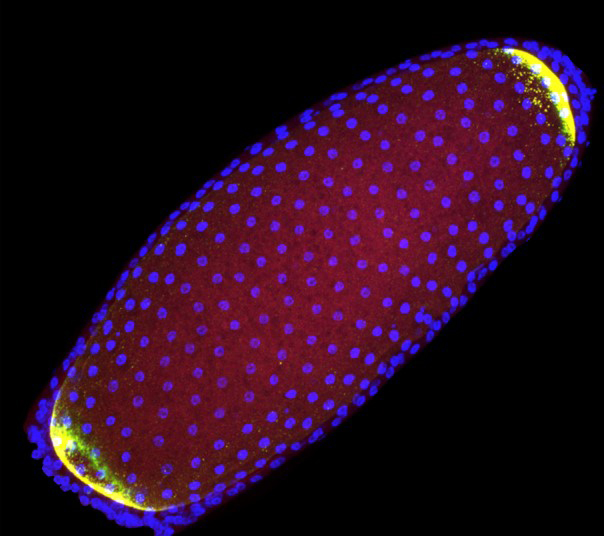 Certain retrotransposons actively traffic to the germ plasm, a specialized structure of the Drosophila oocytes that prefigures descendants in the developing oocyte. The image shows that retrotransposon transcripts (yellow) migrate to natural and ectopic germ plasms in a genetically engineered bipolar fly oocyte, surrounded by somatic nuclei (blue). This suggests that germ plasm targeting represents a fitness strategy adopted by some retrotransposons to ensure transgenerational propagation. Shown is the oocyte from a late stage egg chamber. Accessory nurse cells are cropped from the picture. 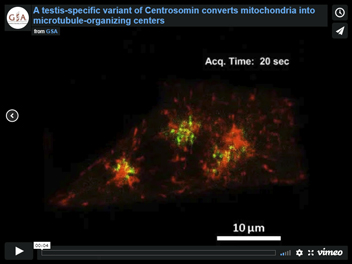 We discovered that, the Drosophila gene centrosomin (cnn) produces a short testis-specific splice variant (named CnnT), in addition to encoding the well-studied long variant that functions at the centrosome, the major microtubule-organizing center in most animal cells. However, CnnT does not localize to the centrosome, but instead, to the mitochondria. We found that on the giant mitochondria in Drosophila spermatids, CnnT forms speckles that are required to recruit gamma-tubulin ring complexes (γ-TuRCs) to organize microtubules and support spermiogenesis. We also found that this CnnT, with its Drosophila origin, is sufficient to convert mitochondria in mammalian culture cells into microtubule-organizing centers. 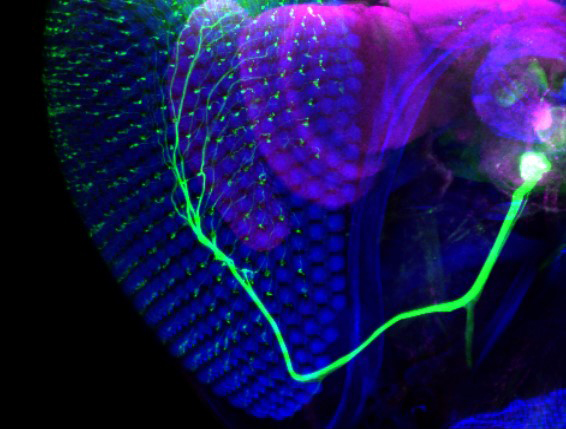 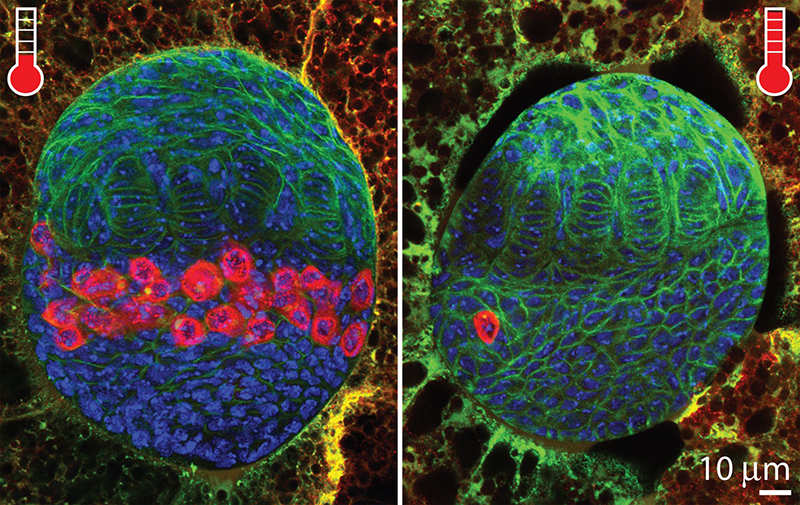 Given the ability to jump around the genome, transposon invasion often leads to animal sterility. By simply adjusting temperature that modulates the activity of P-elements (a DNA transposon), we were able to observe the initial response from germline stem cells that lead to a robust transposon-endogenizing process. Shown is the consequence of transposon invasion in germ cells (red) at 3rd instar larvae stage. Compared to modest transposon activity (left panel; low temperature), strong transposon activity (right panel; high temperature) results in severe loss of the germ cells that subsequently develops rudimentary ovary in adult stage.

Throughout development dynamic and spatially restricted signaling patterns program the embryo.  Here we have harnessed one such signal, Erk, under optogenetic control. The word “ERK” is visualized by dynamically recruiting an activator of Erk signaling to the plasma membrane (middle) through local illuminating the embryo with blue light in the same pattern (top).  This image demonstrates the power of optogenetics to precisely spatiotemporally control signaling during embryogenesis, allowing for one to produce arbitrary developmental patterns. 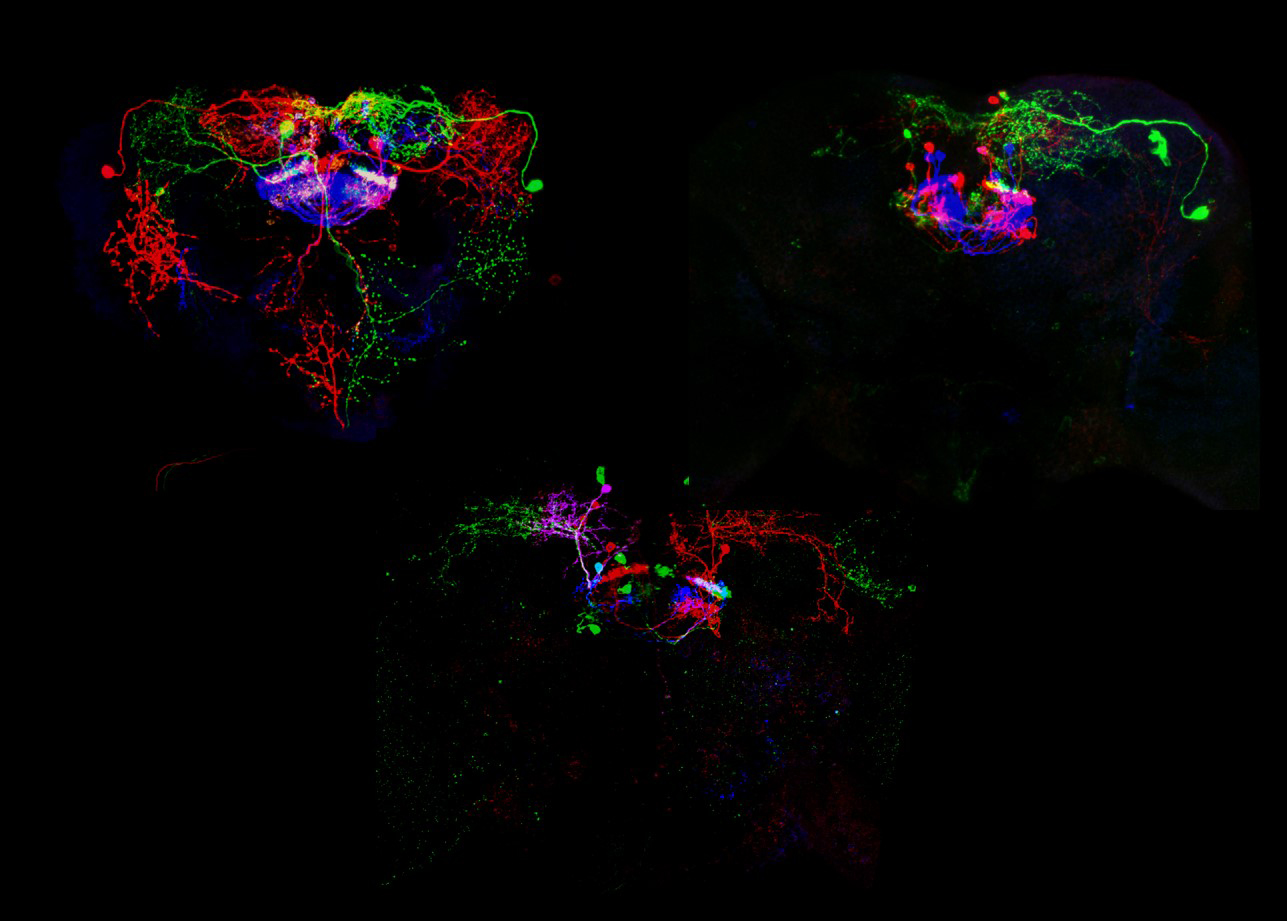 In our paper, we show that when of a small subset of NPF-expressing neurons located in the dorsomedial posterior brain region are activated in a high-throughput two choice assay, the flies displayed a preference. Optogenetic activation of NPF neuron is rewarding in olfactory conditioning experiments and that the preference for NPF neuron activation is dependent on NPF signaling.