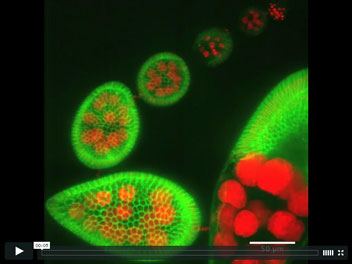 Using live cell imaging to uncover the cell behaviors that underlie elongation of the Drosophila egg, we found that egg chambers undergo polarized global tissue revolutions around the anterior-posterior (A-P) axis during the early elongation phase of oogenesis. This collective cell movement facilitated by the follicle cells is required to build a polarized fibrillar extracellular matrix surrounding each egg chamber that functions as a molecular corset to constrain growth along the circumference and permit most growth along the orthogonal A-P axis. This 4D timelapse movie highlights follicle rotation over 3 hours as an 87μm maximal projection where Indy-GFP (green) marks follicle cell membranes and His2Av-mRFP (red) mark all nuclei. 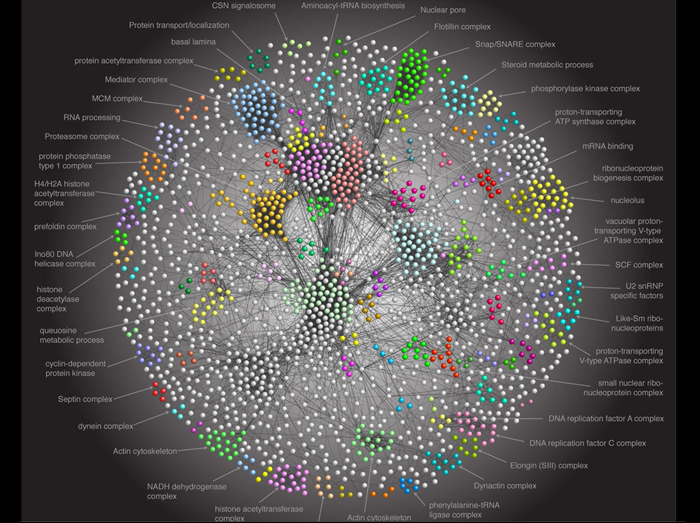 Proteins in a cell accomplish their functions by interacting with other proteins and forming macromolecular complexes. Determining the nature of these relationships is essential to understanding protein function. We generated a high confidence protein interaction network derived from affinity purification and mass spectrometry of more than five thousand fly proteins. This Drosophila Protein interaction Map (DPiM) is the largest metazoan protein complex map to date. The image depicts network visualization of major component of DPiM. The thickness of each line connecting the proteins is proportional to the score of the interaction between them. Different colors indicate distinct functional protein clusters, some of which are labeled. DPiM defines nearly five hundred protein clusters and assigns functions to hundreds of uncharacterized fly proteins. It serves as a starting point for studying dynamics of protein complexes in development and evolution. 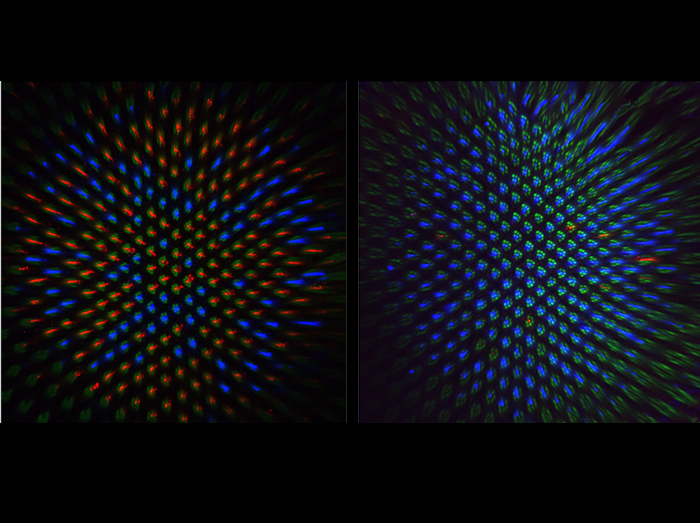 Sensory systems with high discriminatory power use neurons that express single sensory receptor genes from a battery of alternatives. In the normal fly retina (left panel), 70% of R8 color photoreceptor neurons express green light-sensitive Rhodopsin 6 (Rh6, stained in red) and 30% express blue-sensitive Rh5 (stained in blue). In frank sinatra mutants (right panel) part of the rh6 promoter is deleted reducing Rh6 expression to only a few cells. As a consequence, Rh5 becomes de-repressed in almost all R8s in an aging fly. Thus, Rh6 is not only a light receptor which initiates the phototransduction cascade but also acts to maintain the repression of the alternative rhodopsin gene. This preserves exclusive Rh5/Rh6 expression pattern and represents a striking example of one sensory receptor maintaining repression of the alternative sensory receptor. (Green counterstain labels light-gathering structures of all photoreceptors.) 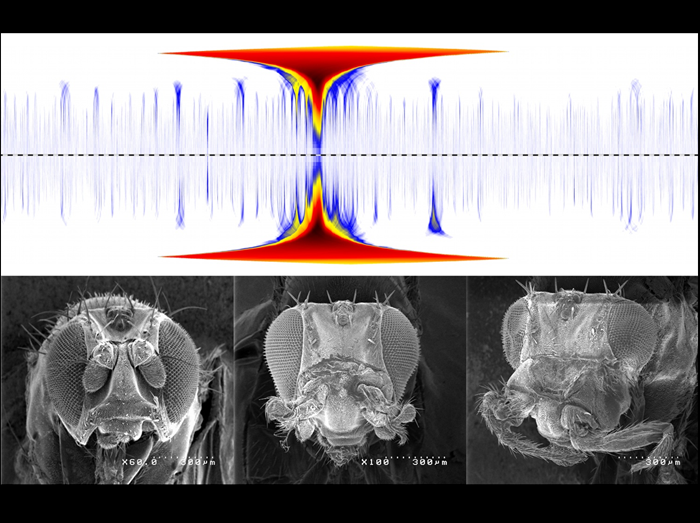 Polycomb group (PcG) proteins are repressive chromatin factors, which bind to specific target sites within the Drosophila genome, and they are distributed non-homogenously in the nucleus. We investigated the role of Polycomb in chromosome organization by using 3D-FISH and a “Chromosome Conformation Capture” technique (4C) that allows to systematically detect contacts that a given locus establishes with the rest of the genome in Drosophila tissues. Our data show that the Abd-B gene from the bithorax complex (BX-C) forms an extensive series of preferential contacts with other PcG target domains over large distances along the chromosome arm, including the Antennapedia complex (ANT-C), located 10 Mb away. The Top panel shows a whole 3R chromosome (centromere proximal to distal) domainogram analysis of wild-type 4C profiles visualizing interactions between the Abd-B gene containing the 4C anchor fragment (large central peak), and other genes along the chromosome arm (deep blue peaks). The deletion of a PcG binding element in the Abd-B locus (mirrored domainogram) significantly affects its long-range contact with ANT-C (first proximal interaction). Strikingly, this perturbation results in derepression of ANT-C genes and in homeotic phenotypes in sensitized genetic backgrounds. The Lower panel shows a wild-type fly (left), a sensitized AntpNs background with a mild Antenna-to-Leg transformation (middle), and a fly with perturbed ANT-C/BX-C contact showing a stronger homeotic phenotype (right). These data suggest that the three-dimensional organization of distant Polycomb target genes can contribute to their silencing. 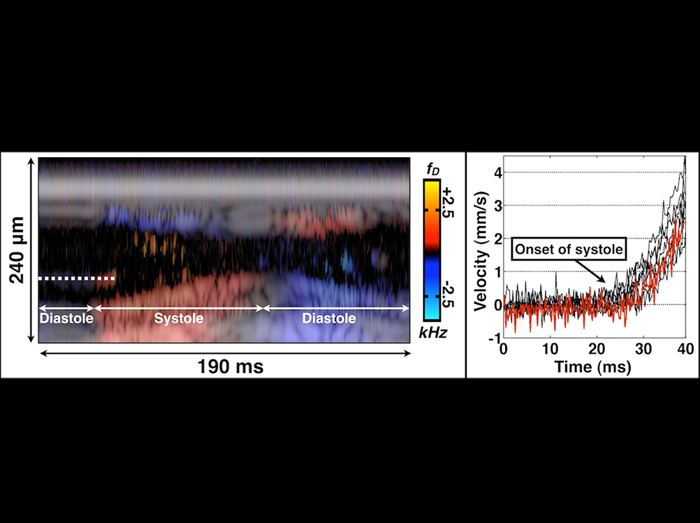 The left panel is an M-mode Doppler/structural image of the Drosophila heart during systole (heart contraction) and diastole (heart relaxation). The dashed line covers an individual hemocyte that undergoes marked acceleration at the initiation of systole. An accelerating hemocyte could be tracked for ~10 milliseconds before it exited the field of view of the M-mode line. The right panel is a velocity plot of eight individual hemocytes during distinct cardiac cycles (n=5 organisms). Hemocyte velocity from the dashed line in the left panel is shown in the red line. Hemocyte acceleration was ~0.2-0.3 m/s2. These results show that Drosphila hearts can be characterized with clinical precision. 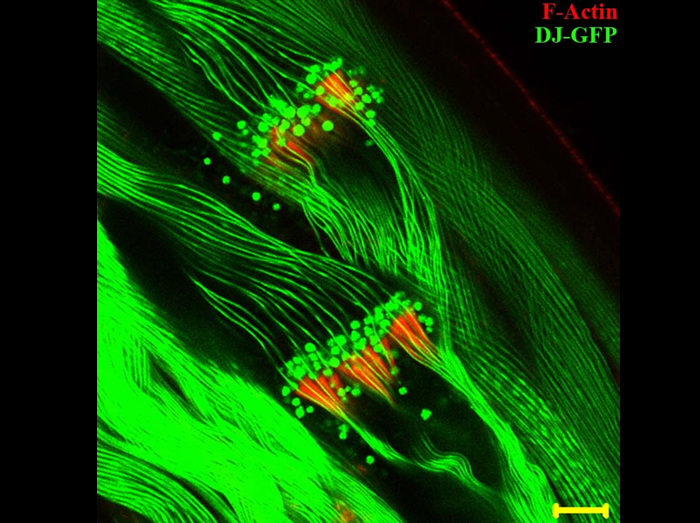 Progression of Individualization Complexes on sperm flagella of Drosophila melanogaster

Mature spermatozoa are produced in Drosophila testis from a syncytium of 64 spermatids through a process called sperm individualization, during which Individualization Complexes consisting of 64 cones of actin assemble around each sperm nucleus and move towards the ends of the sperm flagella, removing all cytoplasm and organelles in the form of a waste bag and producing 64 thin, individual sperms wrapped in their own membranes. The Image shows the progressing Individualization Complexes (Red) on the sperm flagella (Green). The sperm flagella here are labeled with a GFP tagged Don Juan protein, a sperm specific protein, which decorates elongated sperm bundles and mature spermatozoa and exhibits a “beads on a string” organization. The Don Juan-GFP beads co-localize with the moving individualization complexes and get eliminated during the process along with other cytoplasmic debris. Bar indicates 10 µm. 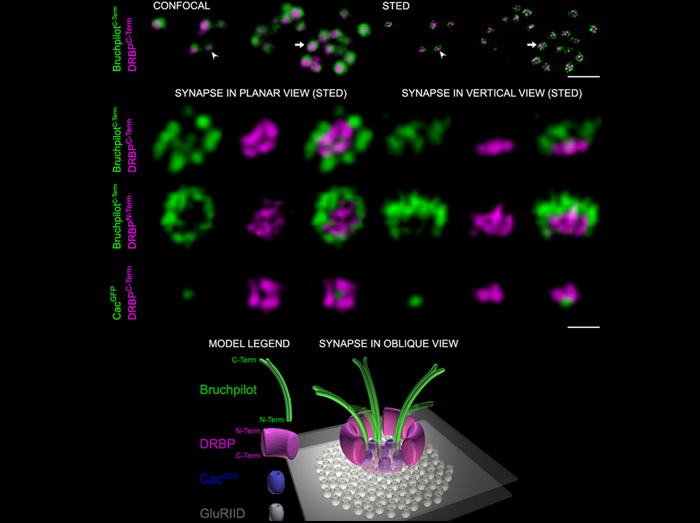 Superresolution Images of Single Synapses at the Drosophila Neuromuscular Junction

The molecular machinery mediating the fusion of synaptic vesicles (SVs) at presynaptic active zone (AZ) membranes has been studied in detail, and several essential components have been identified. AZ-associated protein scaffolds are viewed as only modulatory for transmission. We discovered that Drosophila Rab3-interacting molecule (RIM) – binding protein (DRBP) is essential not only for the integrity of the AZ scaffold but also for exocytotic neurotransmitter release. Two-color stimulated emission depletion microscopy showed that DRBP surrounds the central Ca2+ channel field. In drbp mutants, Ca2+ channel clustering and Ca2+ influx were impaired, and synaptic release probability was drastically reduced.

RIM-binding protein, a central part of the active zone, is essential for neurotransmitter release. 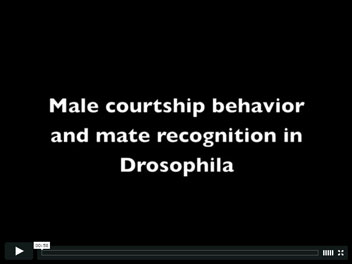 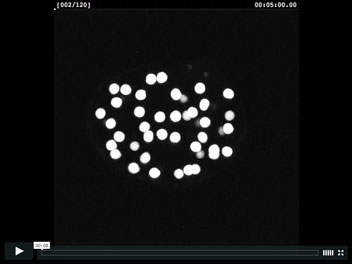 Spermatid elongation is accompanied by unfolding of giant mitochondria into an elongated form (movie), which fill the entire length of sperm tail that reaches 2000 µm from original length of 10 µm.  Primary cultures of elongating spermatids was used to demonstrate that sperm elongation is driven by interdependent extension of giant mitochondria and microtubule array that is formed around the mitochondrial surface.  This work established that in addition to function as an energy source, mitochondria can serve as internal skeleton for shaping cell morphology. 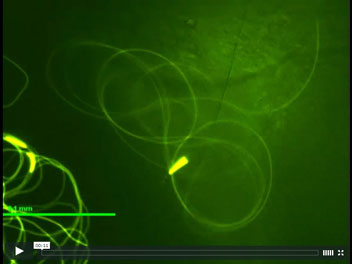 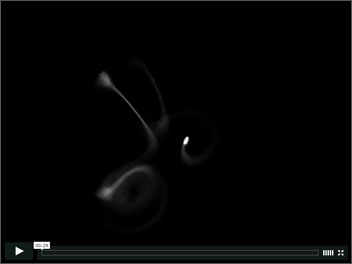 Flagella are ancient motile organelles that generate locomotion through bending of the microtubule axoneme in waves. Most types of flagella propagate waves in a constant base-to-tip direction although the waveform may change. This makes sense because if waves were to initiate from both ends of a flagellum, the opposing waves would lead to inefficient movement or dyskinesia. Although a reversal of wave forming direction could ideally serve as a general strategy for rapid backing up movement, such ability, until recently, appeared to be limited to the flagella of trypanosomes which are unique in having the paraflagellar rod; it was not previously known whether canonical flagella of any species can change wave direction in their natural physiological environments. Here we show, by GFP video imaging, that the Drosophila melanogaster sperm undergo complex motility changes in the female reproductive tract, involving alteration of waveforms and reversal of wave propagation directions. In the uterus, the sperm moves in an arc-line waveform that propagates in a tip-to-base direction; the head is dragging behind its flagellum during movement (Movie 3). After a period of storage in the seminal receptacle, the sperm moves in a helical waveform with a reversed, base-to-tip direction; the head is leading the movement (Movie 11). These videos show that the fly sperm with a regular flagellum lacking the paraflagellar rod is capable of waves in either longitudinal directions and the sperm change the wave forming direction at different locations within the female reproductive tract. These versatile motility changes exhibited by the Drosophila sperm are new findings of historical significance because they allow us to study regulation of flagellar motility at a whole new level. So far, we have found that the sperm’s tail-leading movement into the seminal receptacle tubule is regulated by the Pkd2 calcium channel. 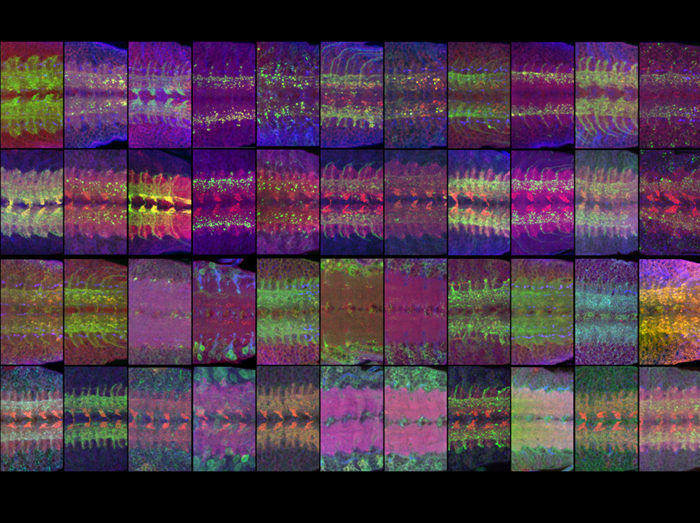 Rab GTPases are master regulators of membrane trafficking in all cells. Expression of YFP-tagged Rabs under their own regulatory elements using a new set of knock-in Gal4 lines reveals that half of all rabs are neuron-specific or strongly neuron-enriched, all neuronal Rabs are synaptically localized and the majority of synaptic Rabs are positive for the recycling endosomal marker Rab11. The image shows the larval ventral ganglion expressing YFP-Rab protein co-labeled for Rab11 (red) and Rab5 (blue) in the first and third row, and the synaptic vesicle marker CSP (red) and Rab7 (blue) in the second and fourth row.

Systematic Discovery of Rab GTPases with Synaptic Functions in Drosophila.