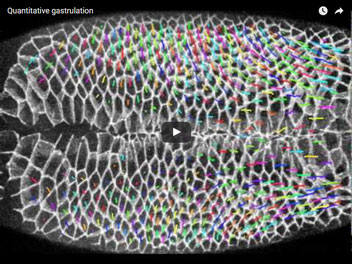 We have applied quantitative methods to live imaging to understand the mechanisms behind tissue reshaping, using Drosophila embryos as a model (1,2).Live Drosophila embryo filmed during gastrulation, with the apical cell membranes labelled with Green Fluorescent protein and automatically tracked through time. On this movie frame, the multicoloured tracks represent the trajectory of the centre of each cell over the previous 4 minutes. 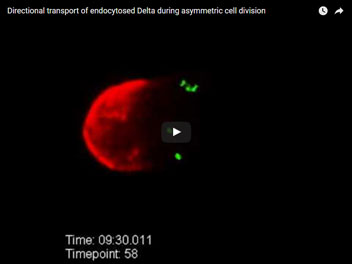 Spinning disc confocal movie depicting the intracellular transport of endogenous Delta molecules during the asymmetric division of a Drosophila sensory organ precursor cell. The Notch-ligand Delta (green) is detected using a fluorescently labelled antibody that is internalized together with the ligand from the cell surface into endocytic vesicles. This novel approach allows imaging the endosomal transport of endogenous signalling molecules in vivo. In this movie, Pon-RFP (red) accumulates first at the anterior cortex of the sensory precursor cell before being inherited by the anterior pIIb daughter cell. In contrast, endosomes transport internalized Delta ligands into the posterior pIIa cell. 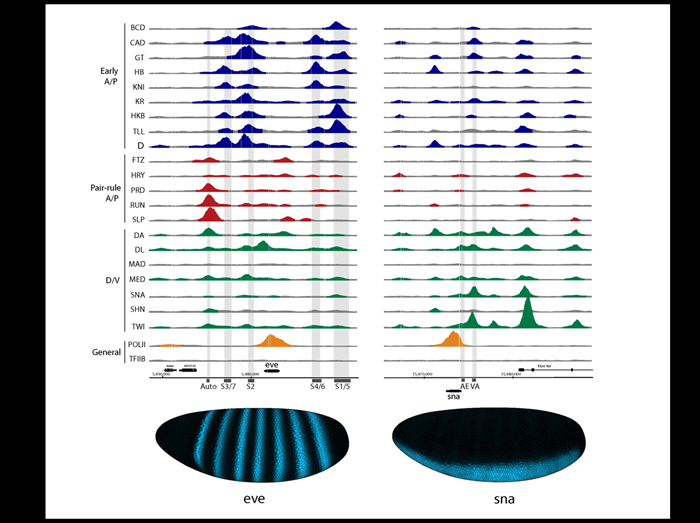 We have mapped the in vivo DNA binding of 21 transcription factors that specify embryo pattern formation in the blastoderm using ChIP-chip. Surprisingly, these factors bind to thousands of overlapping sites throughout the genome. Detailed analyses show that the regulatory outcome for each enhancer, each bound by many factors, is determined by the relative levels of binding by these factors.

The figure presented here illustrates the complexity of the combinatorial control of gene expression, and the importance of interpreting the contribution of each factor to the regulatory function at each enhancer quantitatively. It shows that the known blastoderm enhancers of the eve and sna genes are each bound extensively by factors that belong to each of the major regulatory classes. Yet the output expression patterns of these two target genes differ dramatically. Closer inspection reveals that the early stripe enhancers of the eve gene are bound more strongly by the A/P maternal, gap, and terminal factors; the eve autoregulatory enhancer is bound more strongly by A/P pair-rule factors; and the sna enhancers are bound more strongly by D/V factors. The enhancers bound most strongly by members of a regulatory class correspond to those initially identified as likely targets of these proteins in molecular genetic experiments. In addition to these primary regulatory effects, however, some of the lower levels of binding may also contribute to transcriptional regulation, though more weakly. Thus, for eve the binding by D/V factors may explain the small but significant differences in expression along the D/V axes for each stripe, while for sna, beside its dominant D/V expression pattern, the binding of A/P factors may cause the quantitative variation in expression along the A/P axis.

Developmental roles of 21 Drosophila transcription factors are determined by quantitative differences in binding to an overlapping set of thousands of genomic regions. 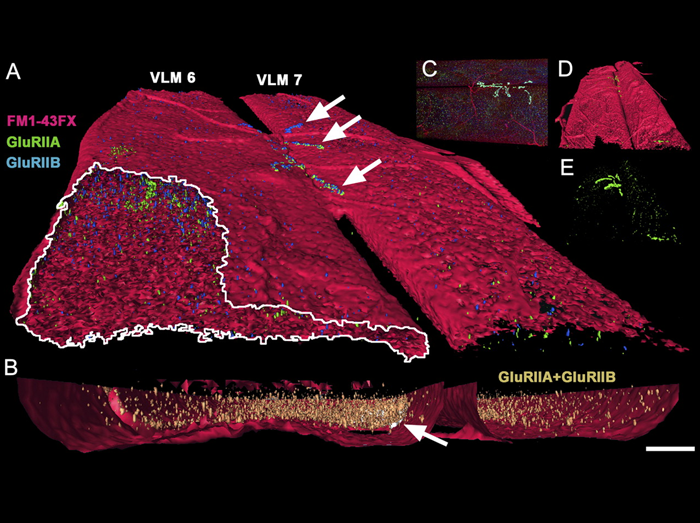 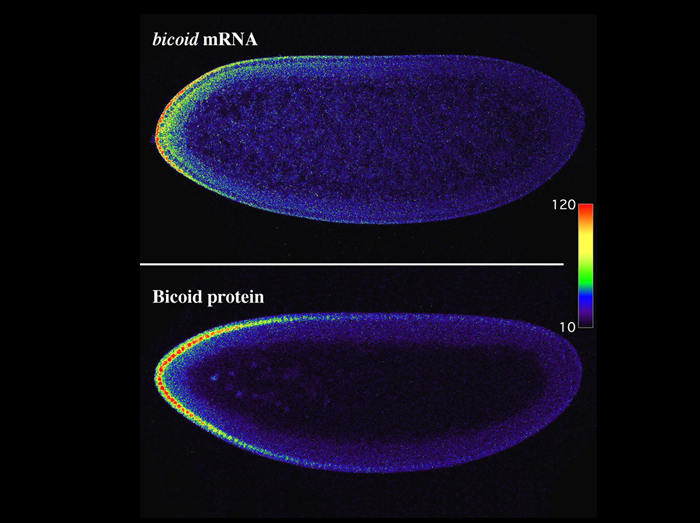 The concentration gradient formed by Bicoid (Bcd), a transcription factor that patterns anterior development in Drosophila, declines exponentially with distance from the anterior pole of the syncytial embryo, and serves as a standard paradigm for how a morphogen provides positional information. Spirov et al. (2009) challenged a prevailing model for the establishment of this gradient. Known as the SDD model, it proposed that the gradient arises when Bcd is synthesised from a bcd mRNA source localised at the anterior pole, diffuses away and is uniformly degraded. Spirov et al. refuted the SDD model: instead of bcd mRNA being localised anteriorly, a bcd mRNA gradient is formed, in agreement with a publication predating the SDD model (Frigerio et al., 1986). Thus, the mRNA gradient is the source for the protein gradient, and not diffusion of the protein.

The two confocal images show embryos at the midsagittal plane of section at interphase of nuclear cycle 14. A color intensity scale is included, with red corresponding to the highest concentrations of mRNA or protein. 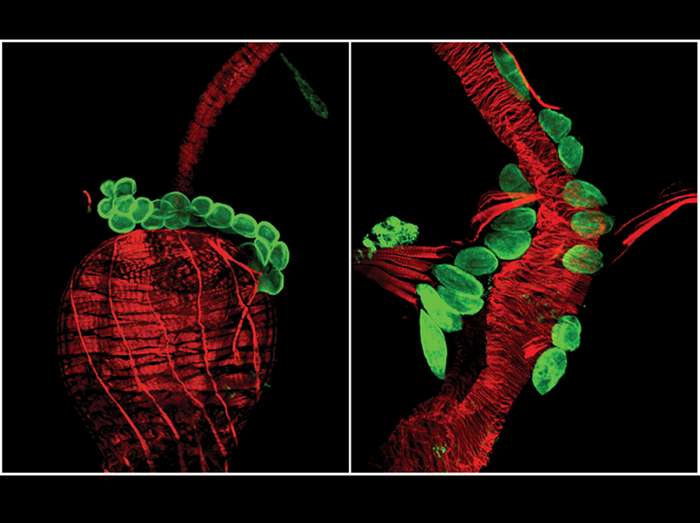 Invertebrate nephrocytes are excretory cells that regulate haemolymph composition by filtration, followed by endocytosis and processing to sequester and/or secondary metabolise toxic materials. In Drosophila there are two types of nephrocyte, garland and pericardial nephrocytes. The garland nephrocytes (left panel, green) form a necklace of cells surrounding the osoephagus just anterior to the proventriculus (both in red), whereas the pericardial nephrocytes (right panel, green) form two rows flanking the heart (red, alary muscles also appear red). We have shown that fly nephrocytes bear remarkable similarity to the glomerular podocyte, a cell in the vertebrate kidney that forms a size-selective barrier as blood is filtered to make urine. In particular both cells have a specialized filtration diaphragm that is built around a conserved molecular complex. An example of this is shown in the image. Sticks and stones (green) is an immunoglobulin-superfamily protein expressed in nephrocytes which, like its orthologue nephrin in the podocyte, is a major constituent of the diaphragm itself. These unexpected similarities suggests that the cells may be evolutionarily related and establish the nephrocyte as a simple model to study podocyte biology and podocyte-associated diseases.

Both images show third instar larvae and are counterstained for actin (phallodin, red). Anterior is upwards.

The insect nephrocyte is a podocyte-like cell with a filtration slit diaphragm.

Denholm B, Skaer H. Bringing together components of the fly renal system. 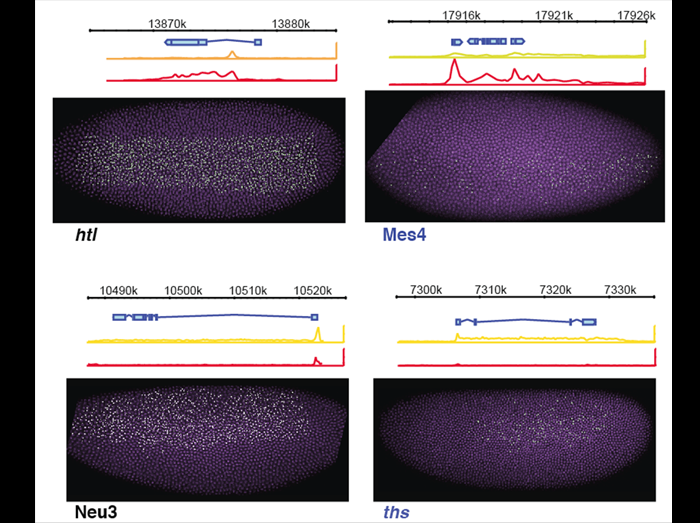 Shown right, Mes2 and ths both show stochastic patterns of activation, with some cells starting transcription well ahead of their neighbors. Pol II only loads on to these promoters in tissues where the gene is expressed. 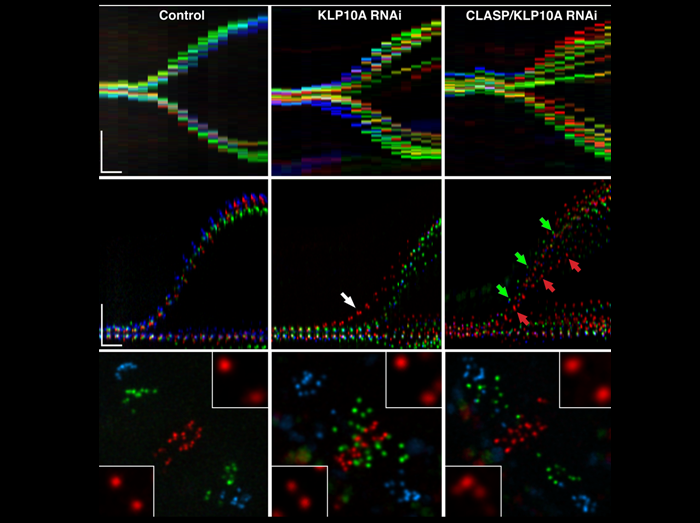 Analysis of chromosome segregation during anaphase in Drosophila S2 cells 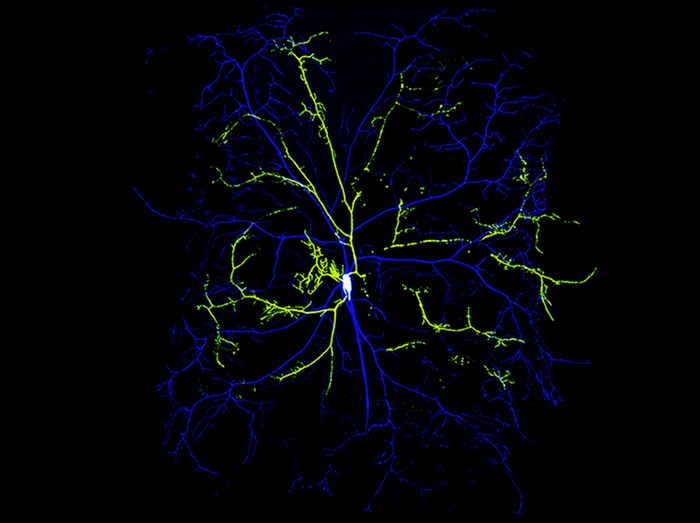 Mitochondrial protein Preli-like is required for development of dendritic arbors and prevents their regression in the Drosophila sensory nervous system. 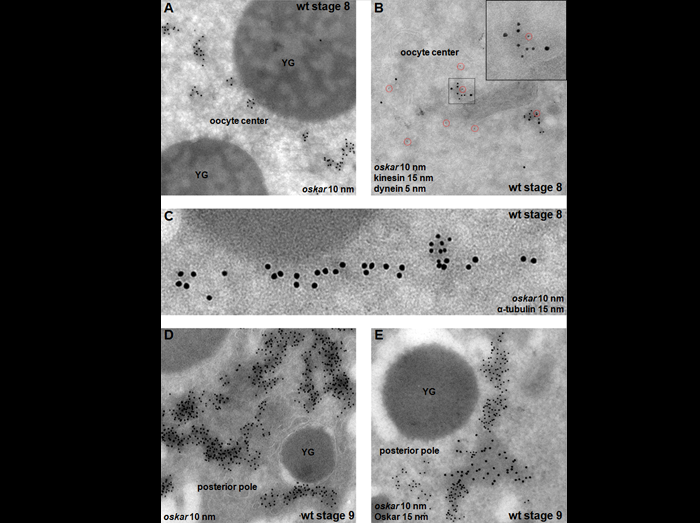 High-resolution analysis of oskar mRNA transport in the Drosophila oocyte

Assembly of endogenous oskar mRNA particles for motor-dependent transport in the Drosophila oocyte. 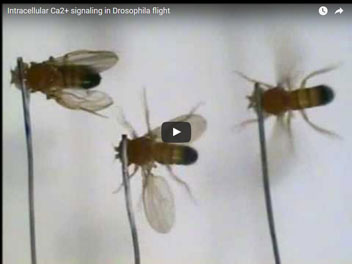