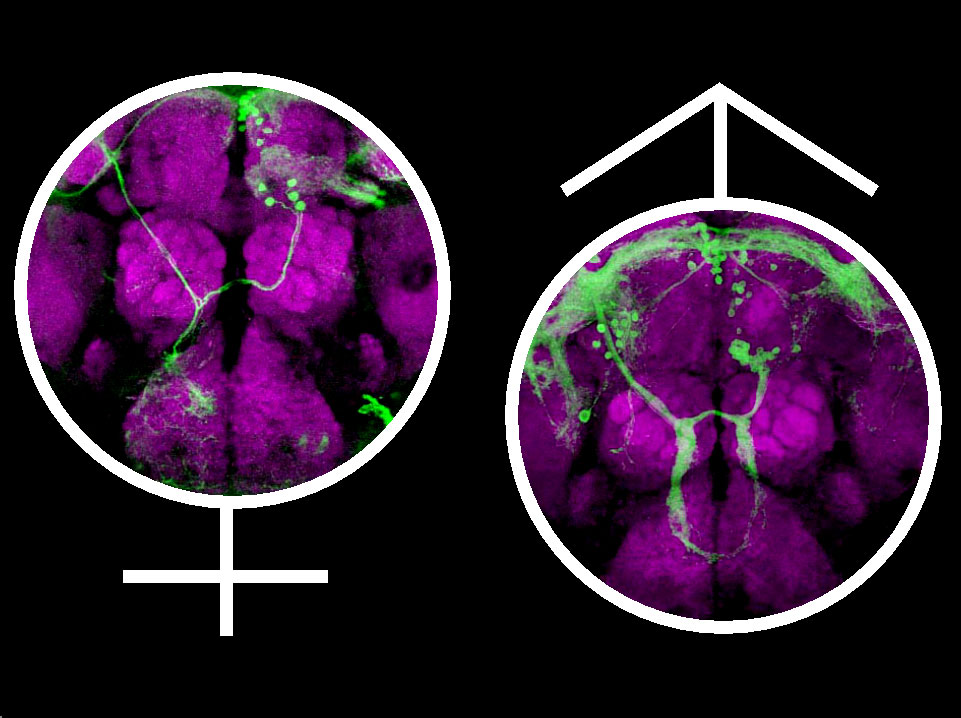 A cluster of Fruitless-expressing neurons in the Drosophila brain has been found to differ between male and females. This difference is produced by active elimination of neuronal precursor cells in females. The male-specific Fruitless protein inhibits programmed cell death in a cluster of neurons, allowing them to form a neural circuit that directs males to court females and not males. This research shows how a single gene can direct brain development and subsequently a sex-specific behavior. In this framework, sexual orientation can be understood in relation to an identified neuronal circuit and defined actions of a sex-determination gene.

This figure shows the projection pattern of sexually dimorphic mAL (medially located, just above Antennal Lobe) neurons in the brain of a female (left) and a male (right). 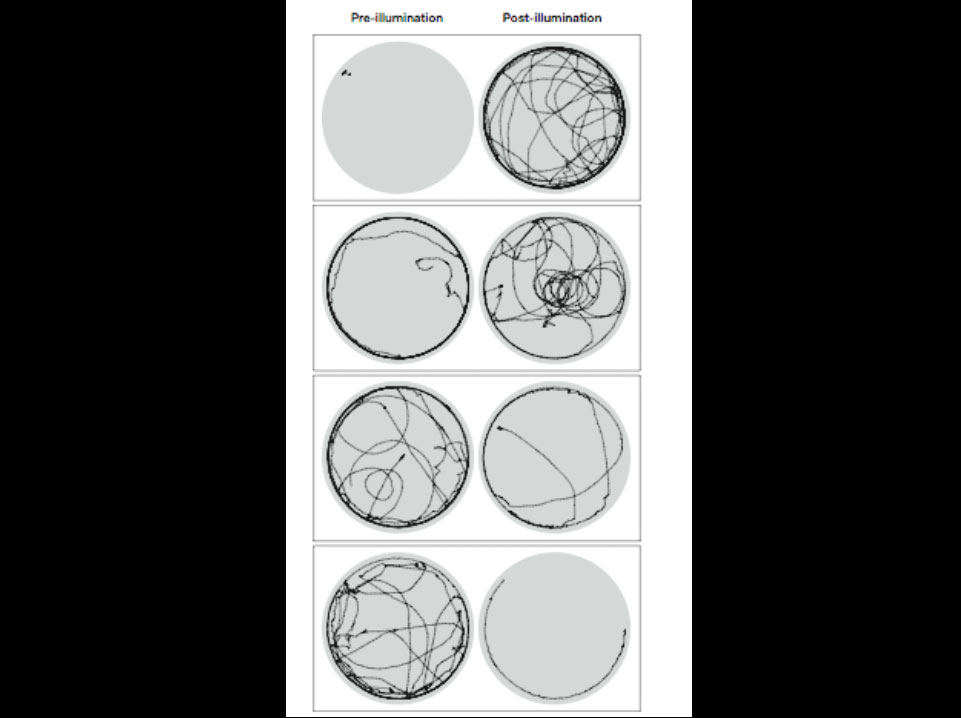 Flies expressing an optically gated ion channel in dopaminergic neurons were analyzed in a 25-mm circular arena (grey circles). Movement trajectories of four individuals during 2-minute observation periods before and after photostimulation of dopaminergic neurons are shown. Note the changes in locomotor activity and in centripetal vs. centrifugal movement patterns following illumination. The four examples are arranged, from top to bottom, in the order of increasing pre-illumination locomotor activity. 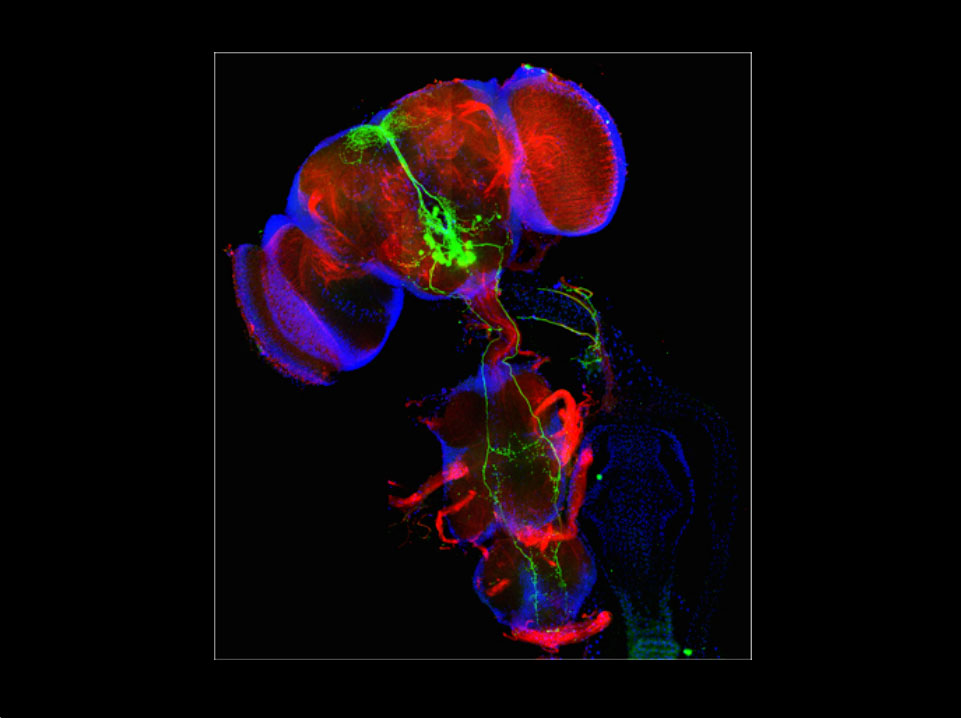 Drosophila, like other multicellular organisms, decides whether to feed or not based on external stimuli, including gustatory information. Displayed is a composite fluorescence image of a Drosophila central nervous system showing a population of neurons interconnecting taste input with higher brain centers, thereby modulating the fly’s feeding behavior. 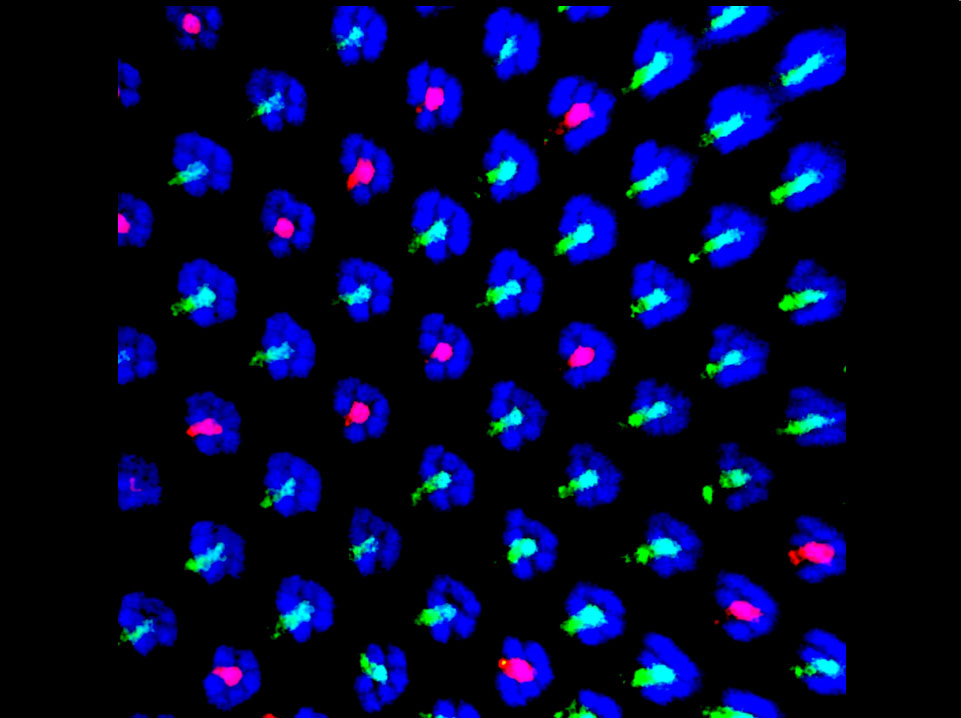 The picture shows the pale and yellow ommatidial subtypes in a whole mounted Drosophila retina. The pale R8 are stained for the blue-sensitive Rhodopsin 5 (red) and the yellow R8 for the green-sensitive Rhodopsin 6 (green). Phalloidin (blue) stains all photoreceptors.

Picture by Esteban O. Mazzoni, from: 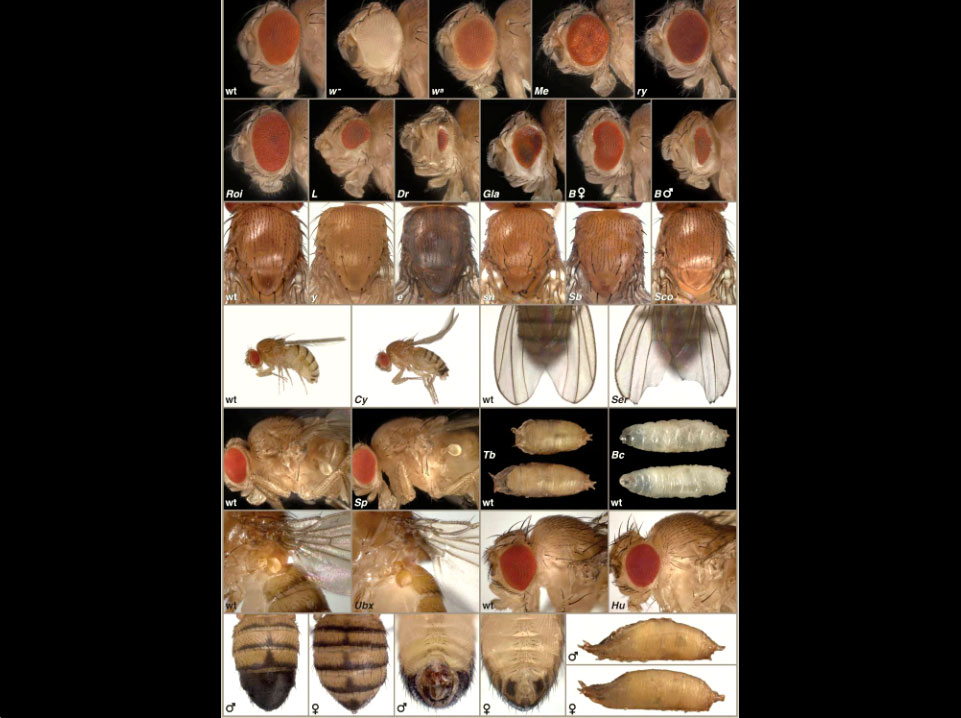 A poster of common phenotypic markers used in Drosophila genetics. 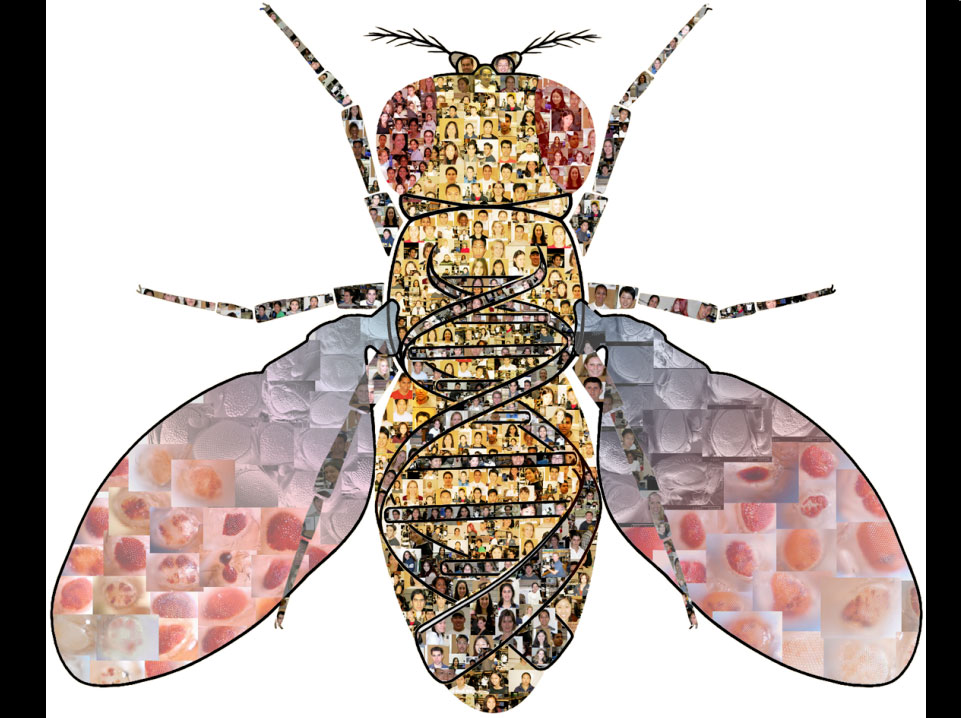 This image contains pictures of all URCFG members (including 140 undergraduate students) that were authors on our first publication. The data describes the eye phenotype through the use of the eyFLP/FRT technique of 1375 different lethal P-element insertions on the 2nd and 3rd chromosomes. The wings contain only a small fraction of the light and scanning electron microscope images that the students took and uploaded onto our database. These and all images are available on our database at www.BruinFly.ucla.edu. This image is a perfect representation of how Drosophila can be used to further both science and education—especially in a method that combines the two. 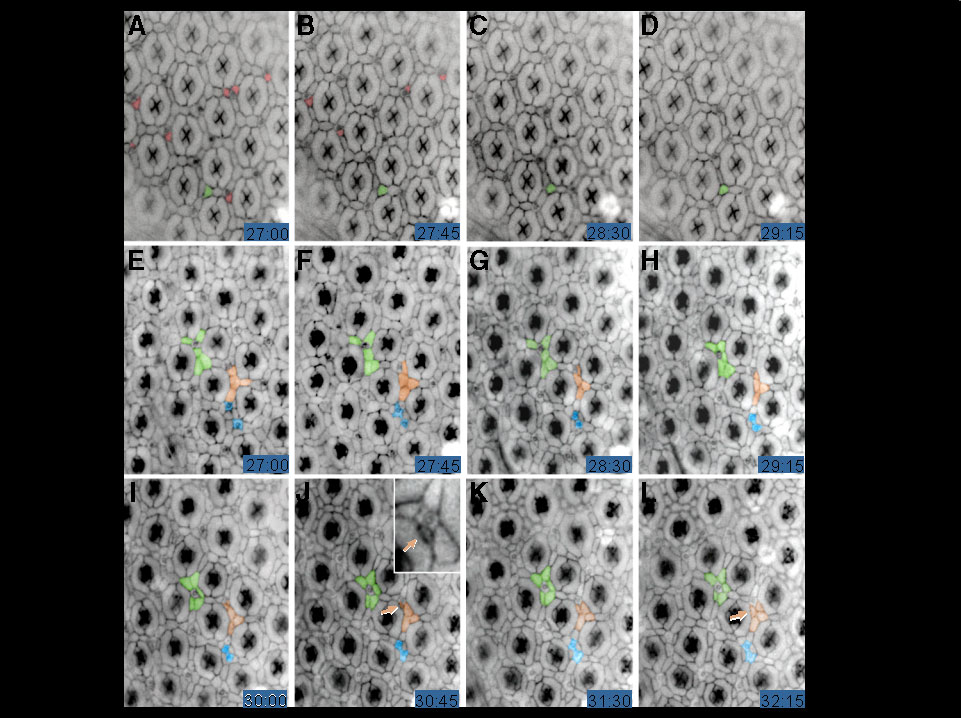 Snapshots from movies showing control (A- D) and Csk -deficient developing retinas (E-L) from live pupae.
In the control movie, normal programmed cell death was observed (red pseudo colored cells) as well as tertiary pigment cell morphogenesis (green pseudo colored cell). In contrast, no cell death was observed in Csk retinas, and aberrant cell movements were observed (examples were highlighted in green, orange and blue). Together with other experiments, such movies indicated that a broad loss of Csk results in decreased cell death and cell adhesion. 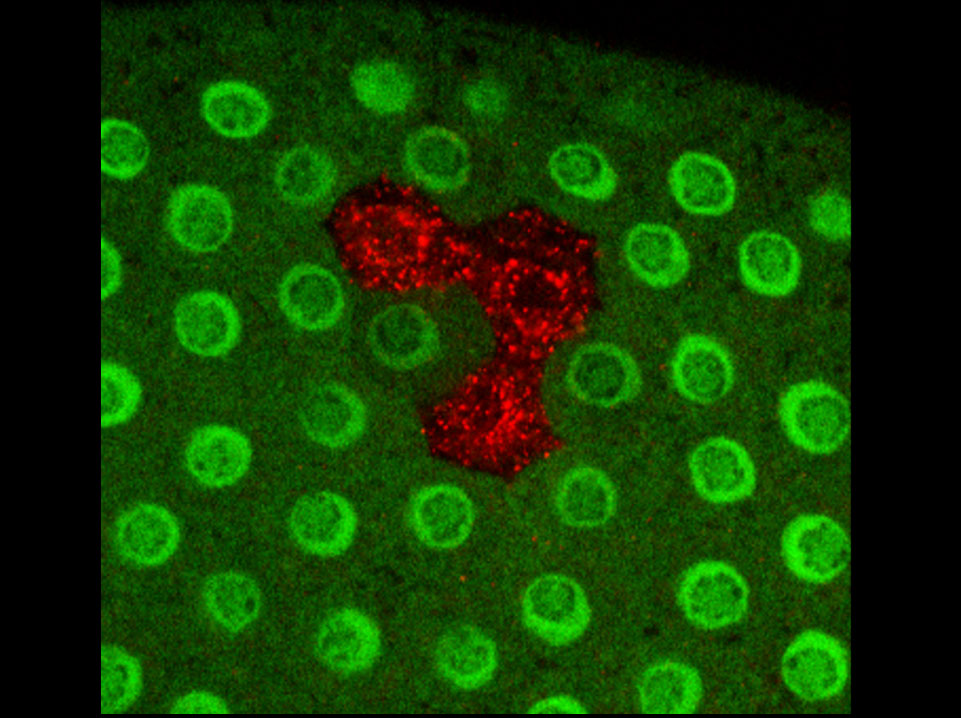 Reversible phosphorylation of myosin regulatory light chain (MRLC) is a key regulatory mechanism controlling myosin activity, and thus regulating the actin/myosin cytoskeleton. In a recent paper in Molecular Biology of the Cell we showed that PP1β, a specific isoform of Serine/Threonine Protein Phosphatase 1 (PP1), regulates non-muscle myosin in Drosophila and that this is the essential role of PP1β. Loss of PP1β leads to increased levels of phosphorylated non-muscle MRLC (Sqh) and actin disorganisation; these phenotypes can be suppressed by reducing the amount of active myosin. The cover image shows a confocal micrograph of a small clone of PP1β mutant Drosophila ovarian follicle cells (marked by lack of EGFP, green), which have accumulated high levels of phosphorylated myosin regulatory light chain, Sqh (red). PP1β, together with its proposed specific substrate and regulatory proteins, are all highly conserved between flies and humans, suggesting that this role may be conserved.

Credits: The sample was prepared by Natasha Vereshchagina, the confocal image was acquired and processed by Helen White-Cooper. 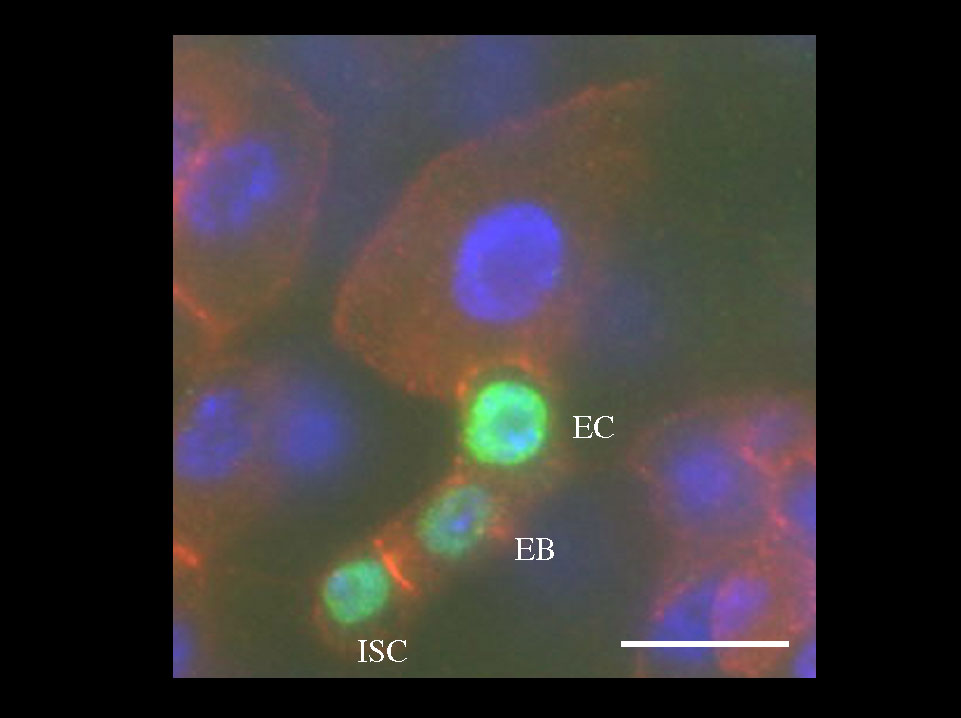 Intestinal Stem Cells reside at the base of cell nests. 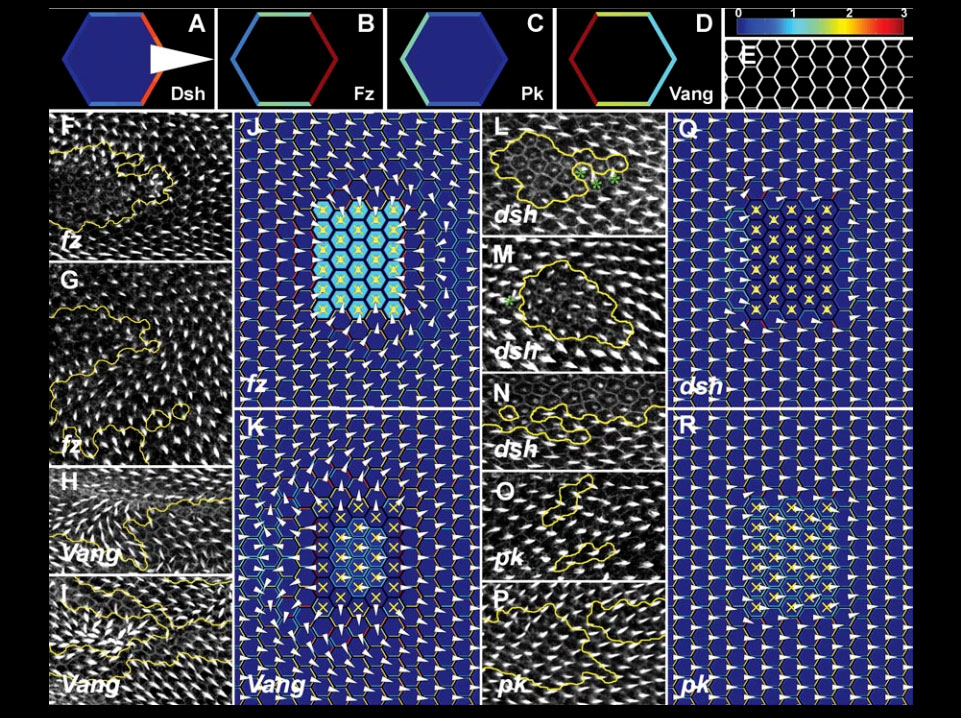 The Figure shows simulations of wild-type (A-D) and four mutant clones (as marked), and compares the polarity patterns to confocal images of phalloidin stained clones in wings. Protein concentrations (all four in A-D, and Dsh in remaining simulations) are shown on a color scale, where 1 is scaled to the initial uniform concentration of Dsh and the scale is truncated so that concentrations greater than 3 are shown in red. Note that the model replicates the presence or absence, as well as the direction of domineering nonautonomy. 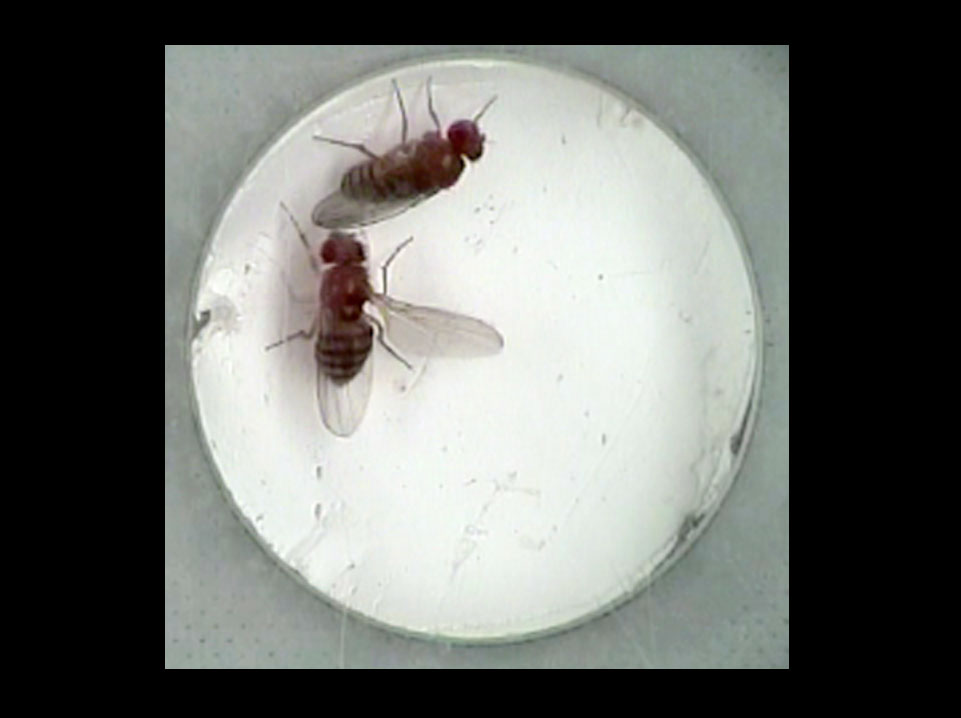 In Drosophila courtship, the male performs an innate “song-and-dance” ritual to woo the female. The song is generated by extending and vibrating a wing. Normally, males court and females do not. However, if females are forced to express the male form of a single gene, fruitless, they now perform the male courtship ritual. In this image, such a female is “singing” as she courts another female. Thus, the action of a single gene is sufficient to generate a complex innate behavior. 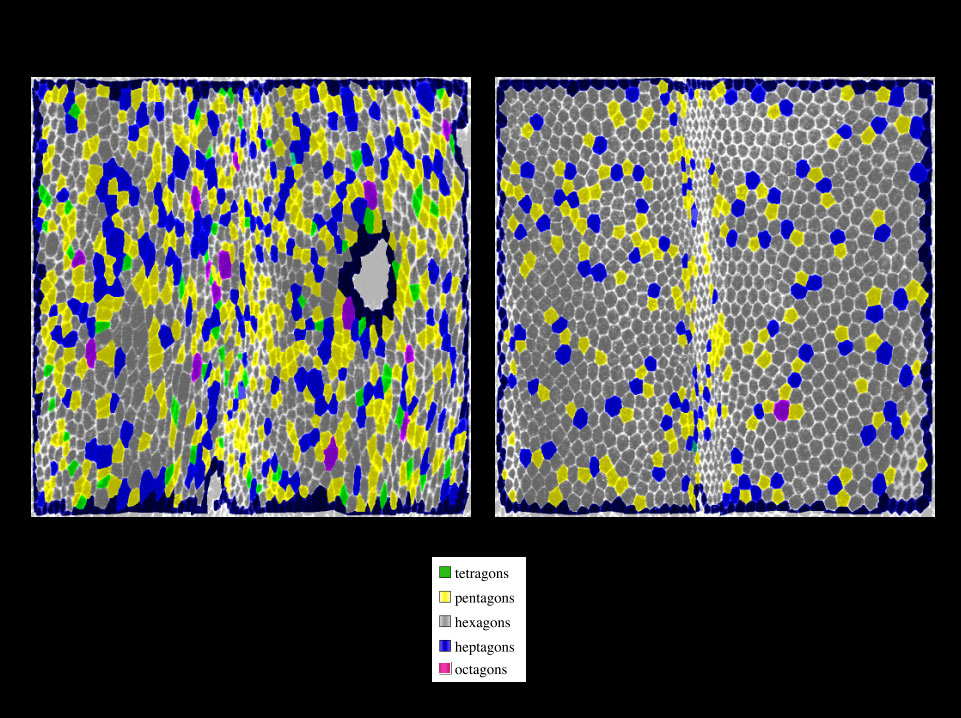 Hexagonal packing of cell in the Drosophila wing epithelium

Wild type wings at prepupal-pupal transition and at hair formation were stained for E-cadherin to outline cells. Images were analyzed using Cellenger to visualize the number of neighbors for each cell in the epithelium.

Wing epithelial cells are irregularly arranged throughout most of development but become hexagonally packed shortly before hair formation. During the process, individual cell boundaries grow and shrink, resulting in local neighbor exchanges and regularization of packing geometry.
Hexagonal packing of wing epithelial cells depends on the activity of the Planar Cell Polarity pathway. 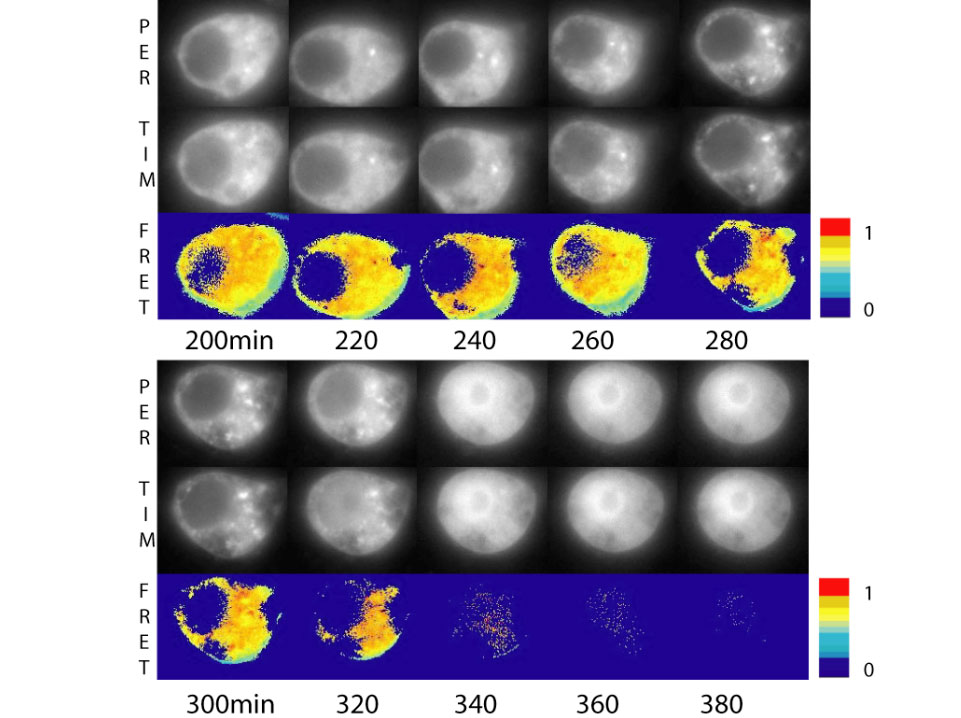 PER/TIM stably interact in the cytoplasm for 320 minutes after their production, and just before their transfer to the nucleus, they separate. 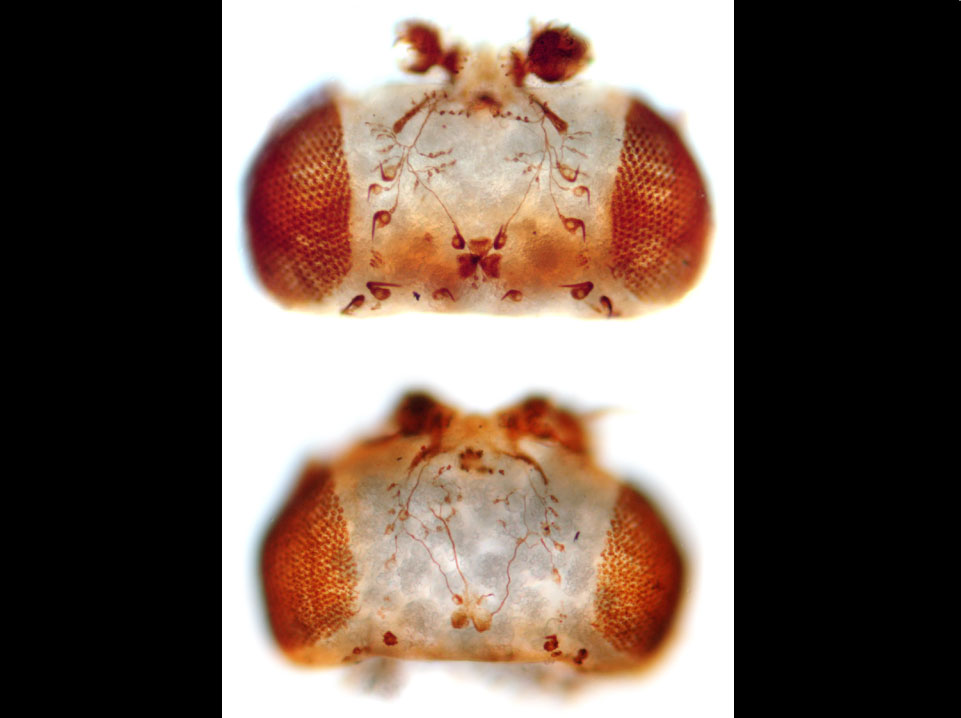 Shown are dorsal views of two Drosophila heads, which have been stained using a monoclonal antibody (22C10) to highlight sensory neuronal axons and neuronal cell bodies. The head on the top depicts the wild type pattern, whereas the head of the individual on the bottom has a mutation its neuroglian gene. InDrosophila the neuroglian gene is the sole representative of the L1 family of neural cell adhesion molecules. Ocellar pioneer and bristle mechanosensory neurons of the head ocellar sensory system both require Neuroglian for proper axonal growth and pathfinding. Kristiansen et al. demonstrate in their publication that this axonal pathfinding phenotype is mediated by endogenous receptor tyrosine kinases. Furthermore, by expressing Drosophila and vertebrate L1 family members in the ocellar sensory system of transgenic Drosophila and rescuing the mutant phenotype they explore the requirement for specific cell adhesion molecules during axonal pathfinding of different neuronal cell types. 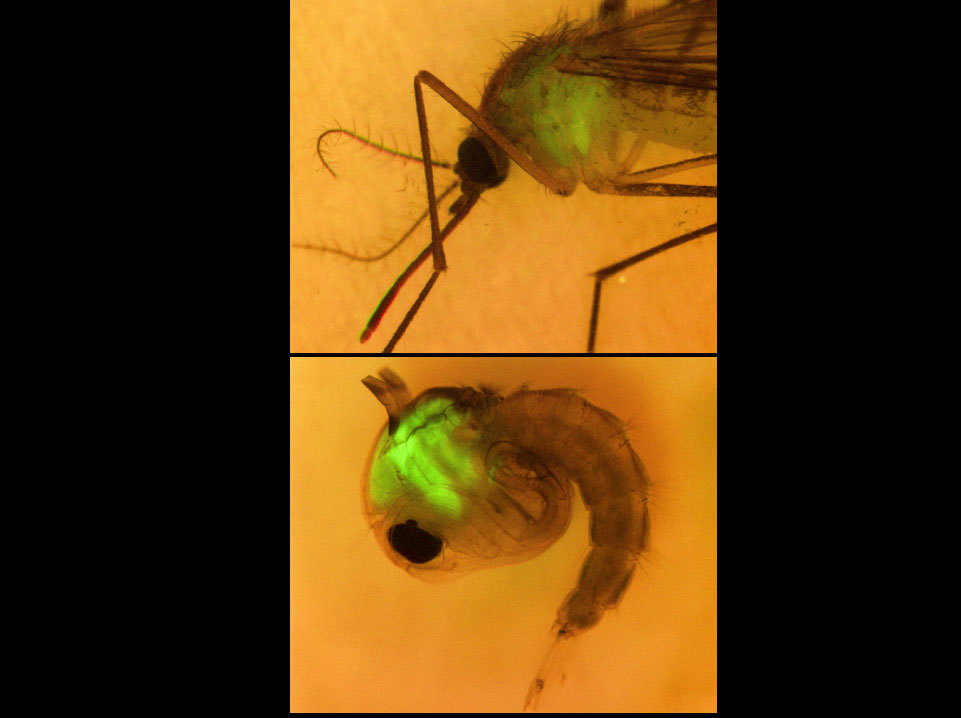 The southern house mosquito, Culex quinquefasciatus, expressing green fluorescent protein (GFP) driven by the Drosophila promoter act88F, a flight muscle-specific promoter. GFP expression in the transgenic mosquito is restricted to the indirect flight muscles of the adult (above) and pupa (below), and not detected in the egg or larva stage. This level of tissue-specific promoter functional homology between insect species is rare. C. quinquefasciatus is a vector for human lymphatic filariasis, and the pathogenic nematode completes development within the flight muscles of the vector.